The new Solidoodle Press 3D Printer is unfortunately far from “plug and play”. After months of shipment delays, my printer arrived with several issues relating to build quality of the printer. I was initially quite discouraged and ready to return the printer, but fortunately I was able to work through my issues and create many successful prints.

This post repeats many points in my earlier blog post, but adds more technical detail to hopefully help other owners of the Solidoodle Press.

Warning: Follow my advice at your own risk. I am not responsible if my instructions cause damage to your printer, you, your surroundings, or if you void your warranty.

Some models shipped with missing screws, including mine.

To correct the issue, first, use SoliPrint (or another application) to increase the print bed to its maximum height without banging into the extruder. Then, unplug all cables and carefully flip the printer upside down.

At the very back of bed on its underside, there are two holes which may be missing screws. I’ve read on Soliforum that these screws are #8 x 3/4″ pan head Phillips screws, but I actually had trouble locating these at Home Depot in Canada. The screw type required is the same size screw used to secure the sides of the printer near the lid, so you could remove a couple of screws from there instead of buying new ones. This may make the side a little loose, but it doesn’t seem to interfere with the operation of my printer.

Installing these screws should make the bed more stable. Don’t fret if your bed is still not 100% level, though. Additionally, there may be two missing screws in the base of the printer near the cable plugins. Use M4 x 10 or 12 screws for this. For some reason, the printer has a plastic shield over the extruder with Solidoodle branding on it. Remove this right away, as it will surely contribute to heat build up and adds an unnecessary extra step to accessing the hot end when it inevitably clogs up (read ahead). I print at 240°C for the extruder, and 105°C for the print bed, which is hotter than SoliPrint’s recommended defaults. The print bed temperature may not matter as much after the first couple layers, but the extruder temperature can be very important for smooth flow of filament.

Start low with the default value, but increase the temperature upwards 5°C at a time if you find that the flow of filament is not very good. You can tell that the flow isn’t good if your printed lines have trouble sticking to each other.

You must install a rubber band to prevent the wires connected to the extruder from getting jammed between the head and the back of the unit. Without the band, you will hear very loud grinding noises which don’t seem to the damage the printer, but are annoying nonetheless.

I installed my rubber band by wrapping it around the wires, and then around the right hinge of the printer’s lid. Note that I’ve installed the rubber band between two plastic parts of the hinge to prevent it from slipping out.

The plastic piece keeping the metal dowel in place actually broke off for me, so I just used electrical tape to prevent from coming loose. Print with the lid open

To ensure the best air flow, I print with my lid open. After a while of printing, too much heat can build up inside the printer. Plus, having the lid opens makes it easier to see what’s going on.

Note: As the filament spool is consumed, it becomes far more likely for the lid to slam down on its own. This doesn’t damage anything, not even the print, but it’s still not good. As a result, I now print with the lid resting on the front door of the printer which still provides extra airflow without the risk of the lid falling. The fan on the right of the side of the extruder blows air out of the extruder assembly by default on some printers. I reversed it by simply removing its screws and flipping it around, to ensure it blows cooler air into the extruder.

This is said to prevent the filament from overheating when it shouldn’t and becoming jammed. Use hairspray (or glue sticks or masking tape)

Although a heated bed is supposed allow the filament’s first layer to bond quite well, I definitely discovered that extra adhesion is necessary.

Hairspray is what I use to prepare my print bed. I was told only a spray or two to cover the print area is all that is needed, but I actually need to use a few sprays to ensure a good coating over the print area. If you can find it, Aquanet “extra hold” hairspray is most recommended brand. I couldn’t find this in Canada, so I found something else clearly labelled as “extra hold”. Not all brands work apparently, so your mileage may vary.

Either right away, and later on during printing, your extruder may start to make clicking noises, and stop extruding filament.

After reading various posts on Soliforum, I decided to try adjusting the trimpot, following Solidoodle’s instructions.

The instructions are vague when using a multimeter, but forum users explained to me that you touch the high (usually red) lead of the multimeter to the side of the trimpot which has only one metal contact, and the low (black) lead to the metal casing around the USB input port. You to do this when the printer is on, with the green lights in the power button also on. Simply plugged in is not enough. I’m not sure if it matters, but I had better success when the printer unit was upright, as the motherboard wires are long enough to allow the board to sit behind the printer, with the printer right-side up.

When I initially did this, I got readings that were way off, and the extruder trimpot could only reach 1.1v (or so it seemed) instead of the required 1.5v. Things got worse after my adjustments, so I tried measuring again, and discovered I did something wrong before. I adjusted the readings again, and got much better results.

As scary as it sounds, your extruder head might eventually clog even after the initial set up when you have calibrated everything. When this happens to me, I follow these steps to use a drill to declog the hot end. Warning! Do this at your own risk. Using a drill could cause damage to your extruder or printer if you’re not careful. Try to avoid allowing the hot end to melt the plastic on the left side of the extruder head assembly. Print bed stays heated, even when printer is off

My printer’s bed immediately begins heating as soon as I plug it in, even if the printer is off. The software temperature settings are ignored, but fortunately it settles at around 108°C which is acceptable for printing anyway. For safety reasons, I must unplug the printer after every use so that power to the print bed is cut.

UPDATE: I contacted Solidoodle support and they finally send me a new motherboard which resolved the issue.

After you’ve resolved all other issues, be sure to run the z-axis calibration using SoliPrint, and again after any other major changes to your printer that may affect bed height. This calibration affects the printer’s operation using all other applications too.

[Edit on Oct-4-2015] I edited this section to indicate that I am now using (and recommending) the Simplify3D software.

SoliPrint was created by Solidoodle especially for the Press 3D Printer. It is easy to use, but it lacks a few features.

Simpify3D is the software I am now using. It’s quite easy to set up, and has built in profiles for the Solidoodle Press. It also supports Windows, Mac and Linux.

If you don’t want to pay for Simplify3D, Repetier Host is a free option. It is more difficult to set up initially, but its main benefit is the use of the Cura slicer engine which works much better than Slic3r used by SoliPrint. Unfortunately, Repetier Host only supports Cura in its versions for Windows or Linux.

The settings you need are below, as provided by Soliryan on Soliforum. 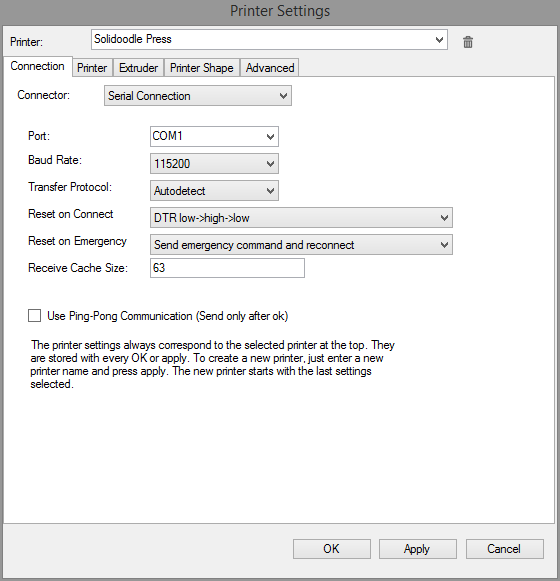 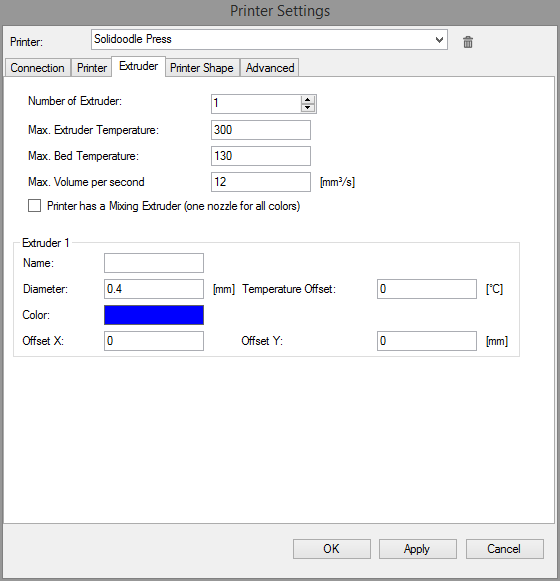 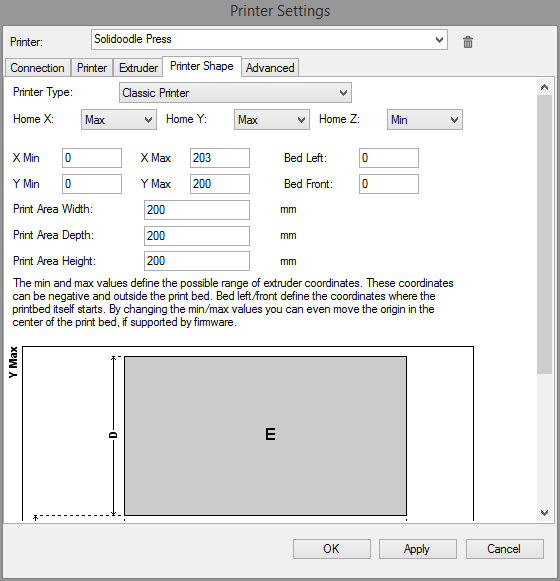 The Cura slicer engine, by default, has its own startup G-codes which I find interfere with the Press. I deleted them as shown below. 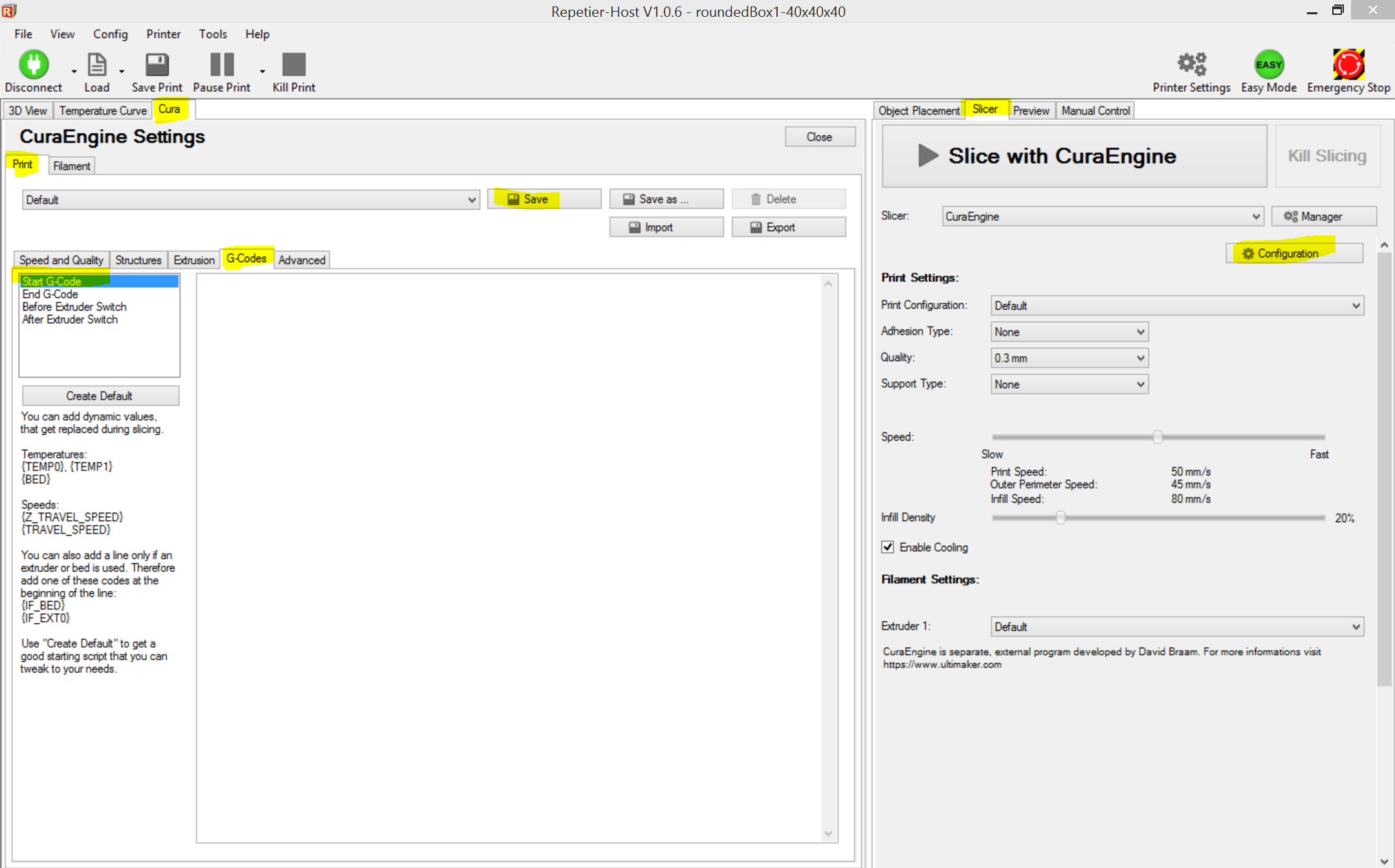 If you have a Mac, you may be happier sticking to SoliPrint for now or paying for Simplify3D. With Slic3r and Repetier Host, you’ll need to accept that some models you download from the internet simply won’t print properly. Apparently ,you can download Cura as a standalone application, process 3D models, and import the resulting G-code into SoliPrint. I haven’t tried this yet, though.

This post describes the issues I encountered and how to solve them. You may experience different issues.

Soliforum is a great online community with a section specific to the Press. Solidoodle’s own support page is also great for a few common issues. You can also post on Reddit’s 3D Printing subreddit for general issues, but I don’t see many Solidoodle-specific issues there.

If all else fails, you can contact Solidoodle Support directly, but you’ll of course get faster service if your problem is already covered by the above resources.

Feel free to also comment here if you have any feedback about what I’ve posted.

One thought on “Getting started with the Solidoodle Press”