I was to sad see Zellers go, as it was a store that was always in the community where I grew up. I also regret to see Target leaving Canada since it is unlikely that another retailer will take its place. Walmart has announced they will take over some locations, and GoodLife Fitness will also take some. The rest will go to, well, who knows. It costs a lot of money to divide larger spaces into smaller ones (walls, HVAC, etc.), so some smaller malls may end demolishing their vacant spaces to save taxes.

Target was very optimistic, and as it turns out, unprepared, when expanding into Canada. They knew there would be unique challenges – speaking a different language in Quebec and New Brunswick, for starters, but it seems they had no idea how to manage such a large brand new footprint in a different country. They took on 130 new stores in all, excluding dozens of rejected Zellers locations that transitioned to other uses. Having said that, Hudson’s Bay Company wanted to unload the entire Zellers footprint of locations quickly. Target likely knew that all locations it didn’t take would possibly become occupied by a competitor, such as Walmart.

Another factor in Target Canada’s demise was the fact they didn’t actually take over the store operations of Zellers. They bought only the leases, and established everything from scratch, including a distribution network. It is widely believed this move was designed to avoid having unionized employees, but in the end, the move didn’t work out well at all. Canada is often the first stop for American companies expanding internationally, and Target’s spectacular failure in Canada firmly confines them to the United States, where things aren’t getting any easier.

The closure of both Zellers, followed by Target, is a sad story overall. 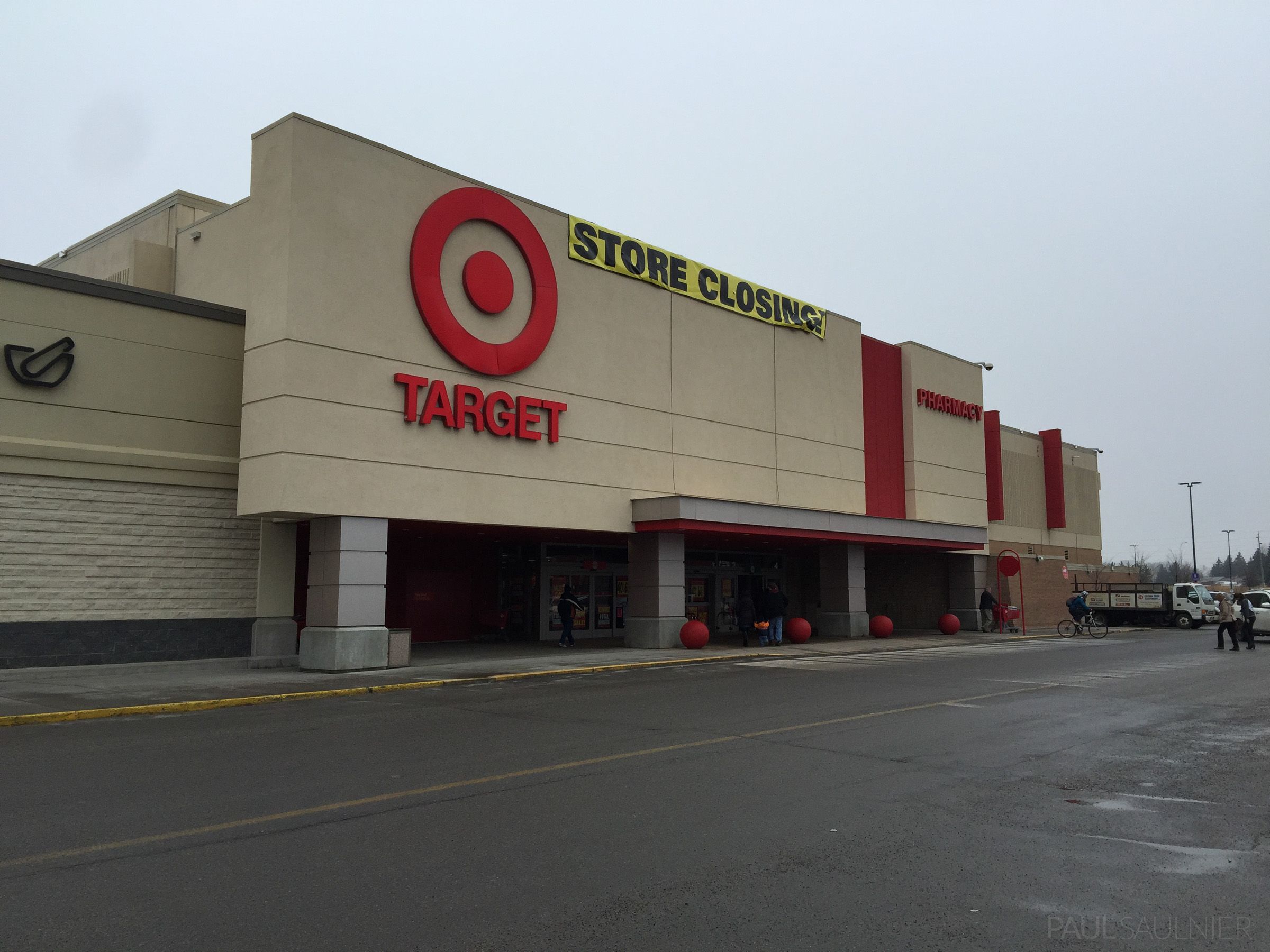 This Market Mall facade was completely rebuilt by Target, and looks completely different from the way Zellers had it. However, I believe the walls to the right are original to this location from when it was a Woodwards store before Zellers, aside from the vertical red bars added by Target. 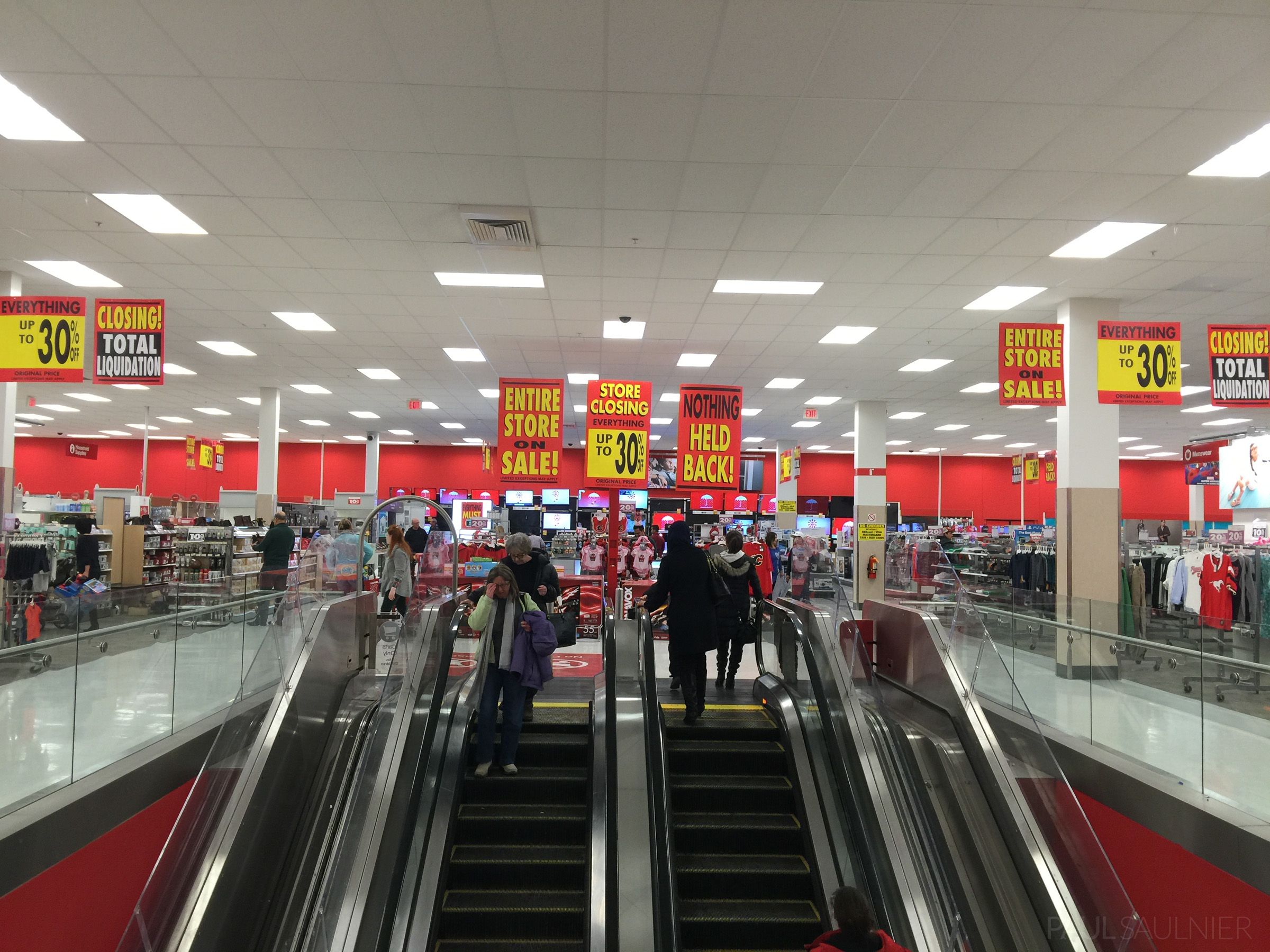 Target’s expansion into Canada wasn’t cheap. I read that they spent $30-Million per location on renovations. This particular store previously had escalators, but Target paid for new ones to be installed and rotated in comparison to the original Zellers layout. 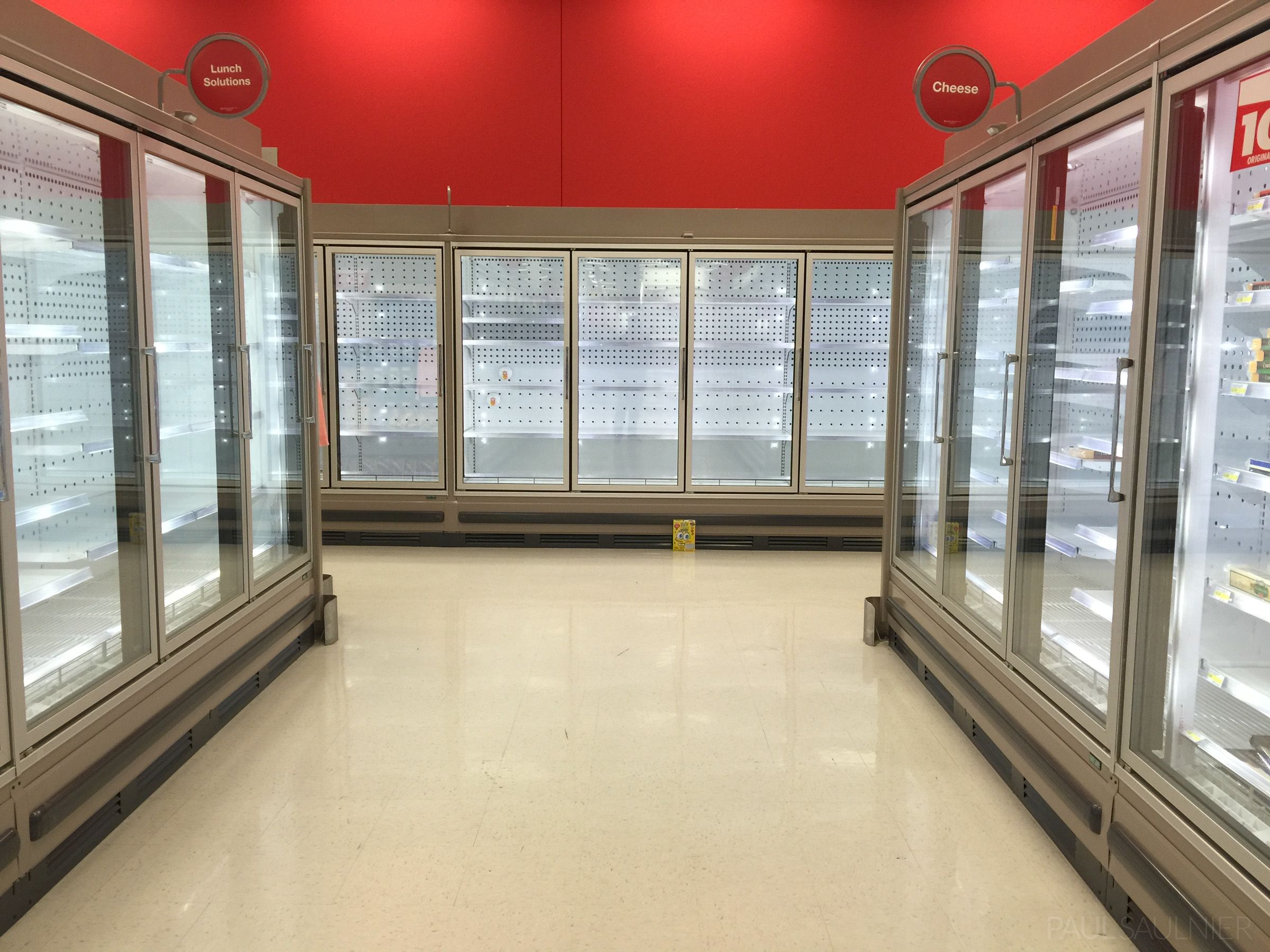 Empty coolers were all that remained in the grocery section of this Target store. A box of Spongebob-branded something sat alone on the floor. The groceries, provided by Sobeys, and the Starbucks shops were the first elements inside Target stores to disappear after their plans to leave Canada were announced. 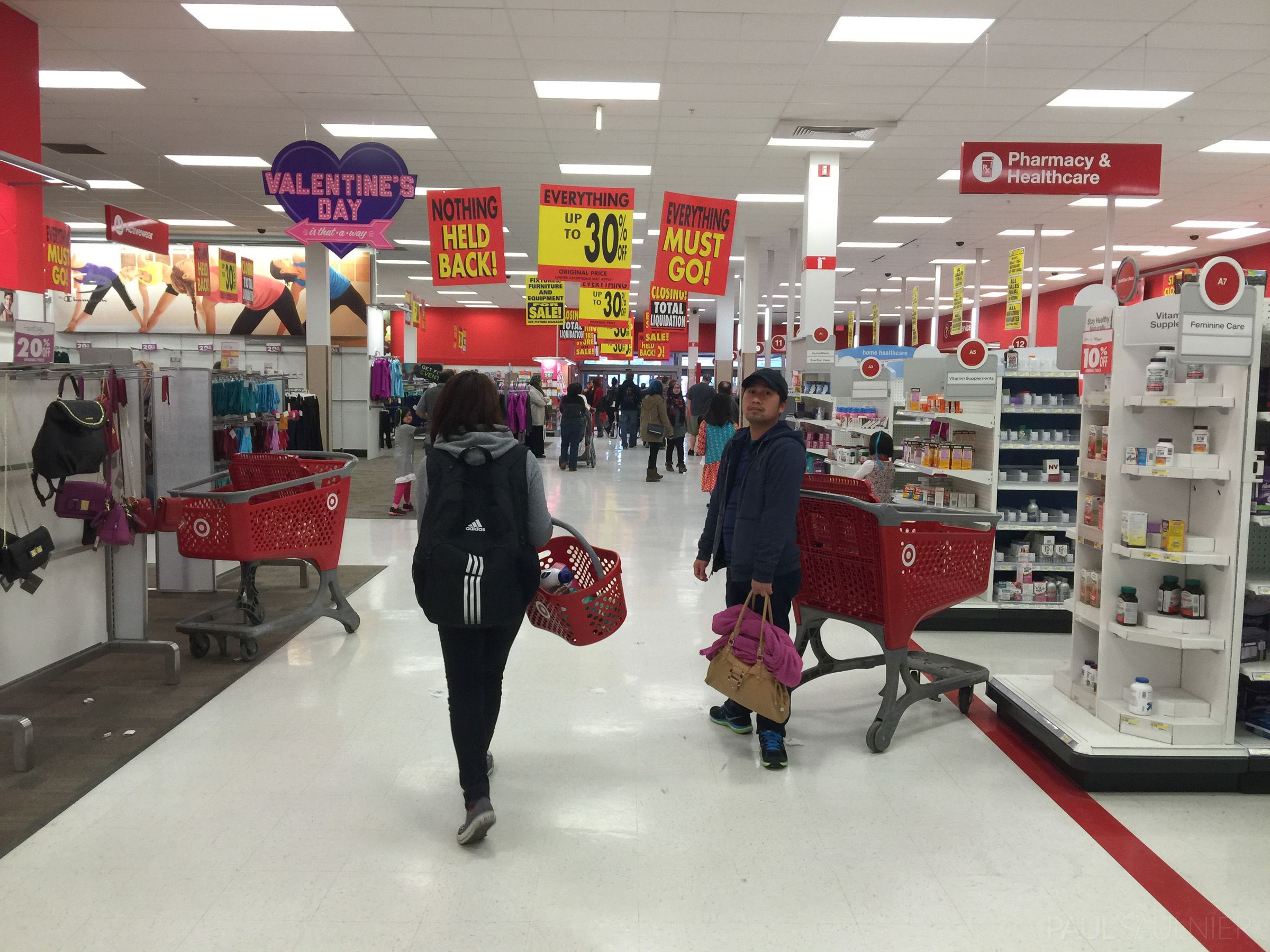 Say what you want, but Target’s money was well spent at producing beautiful stores with a comfortable shopping layout. It was a shame to see these layouts become littered with liquidation signage, and a mess of merchandise everywhere. I remember peering through the doors of this particular location before it opened as Target and watching the changes they had made since it was a Zellers. 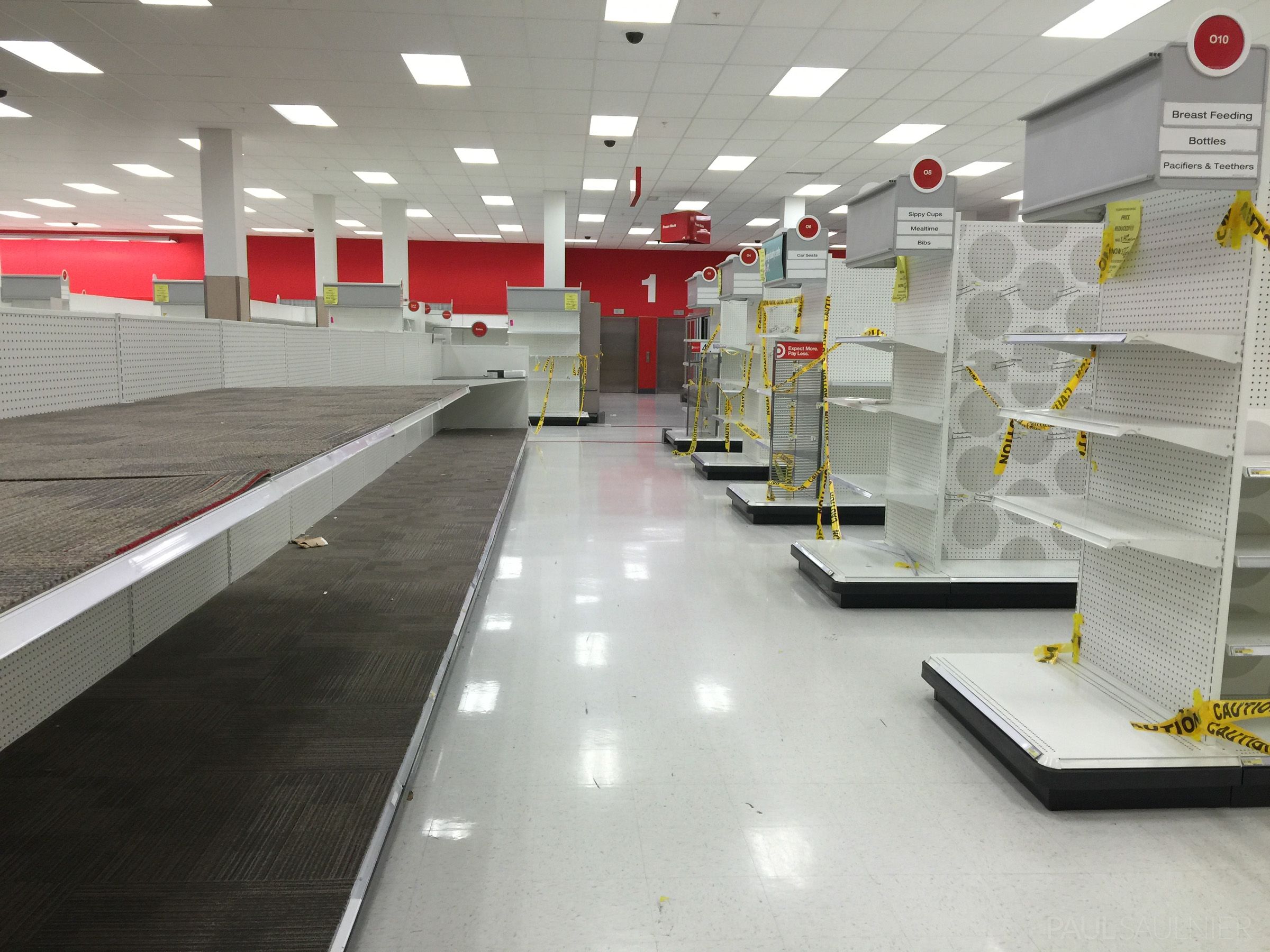 With just days remaining before the store closed, most sections were completely empty and blocked. The signs advertising categories of merchandise were no longer applicable. You’ll have to go elsewhere for “sippy cups”. 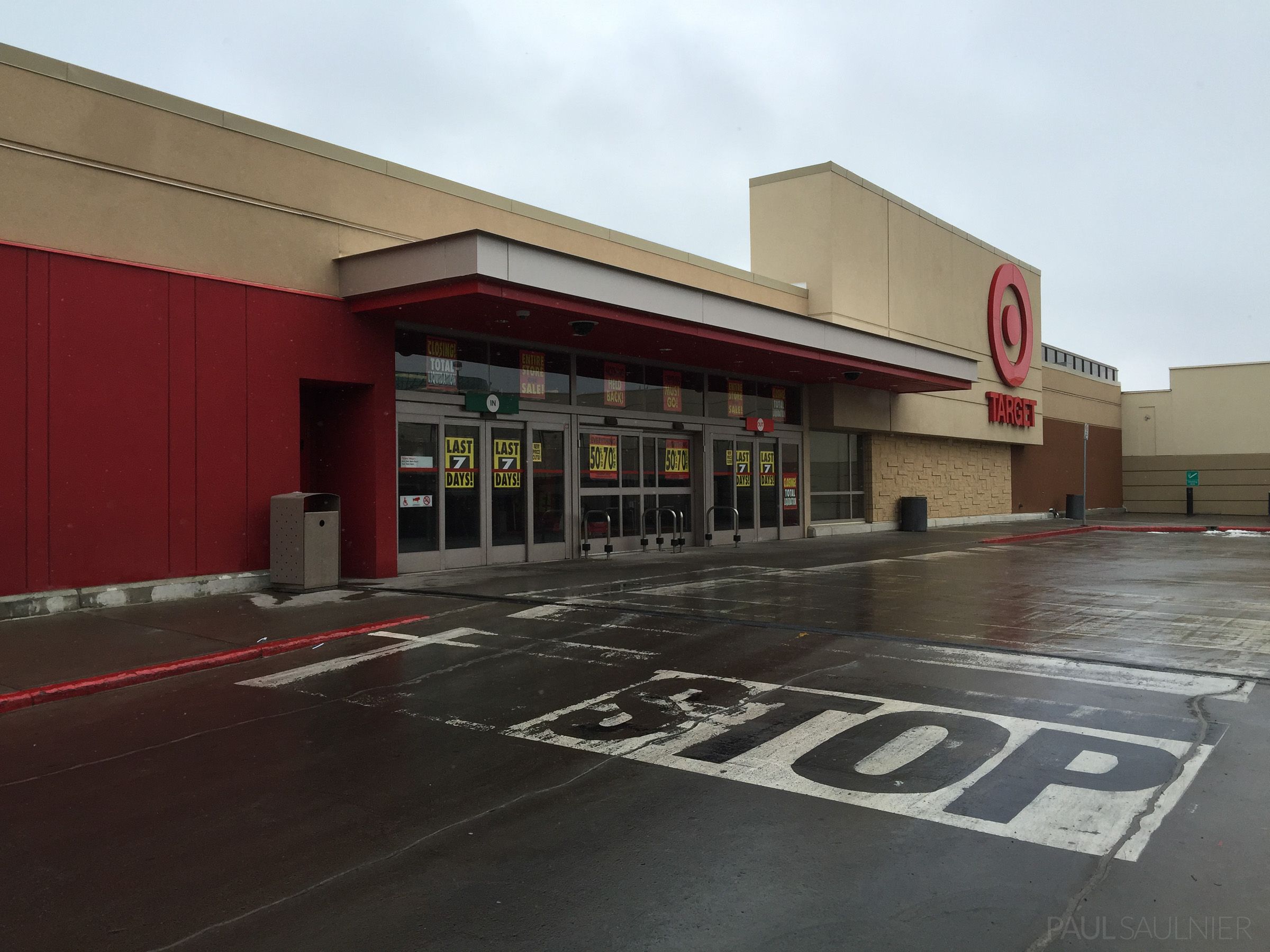