It’s hard to believe, but it’s been over 7 months since my Uncle Walter Kappelmann passed away in September. Like me, he always enjoyed photography. I inherited his old cameras, including a Nikon SLR with half used film still in it. I wondered what mysterious photos were undeveloped inside the camera, and what to do with the rest of the film. Like most people, I had not used film in years. My Uncle Walter and I at Lake Louise, June 2011

I felt that it was only appropriate to use the remaining exposures to make pictures that would remind me of Walter. I finished up the first roll around Walter’s house. Once I got these developed back in Calgary, I discovered photos from a family event from over 10 years ago! I used the other rolls of film that were in the camera bag by taking of photos of places around Saint John that meant something to Walter or that brought back memories of my last photo walk with him in 2012.

Since the film is so old, a distinctive haze appears on all of the photos, which for me adds to their appeal and reinforces the memories I have associated with the photos. I actually have digital versions of most of these photos, but these ones are special because they were taken with Walter’s camera with his very last rolls of film that he would ever own. In this picture, recent photos lay next to old camera equipment that has been in my family for decades.

At Christmas, my grandmother also found a dozen rolls of film taken by Walter 25-30 years ago, but never developed. I also had these developed, and was the first person to see these images never seen by Walter himself. In this blog post, I have shared the highlights from both collections of photos. 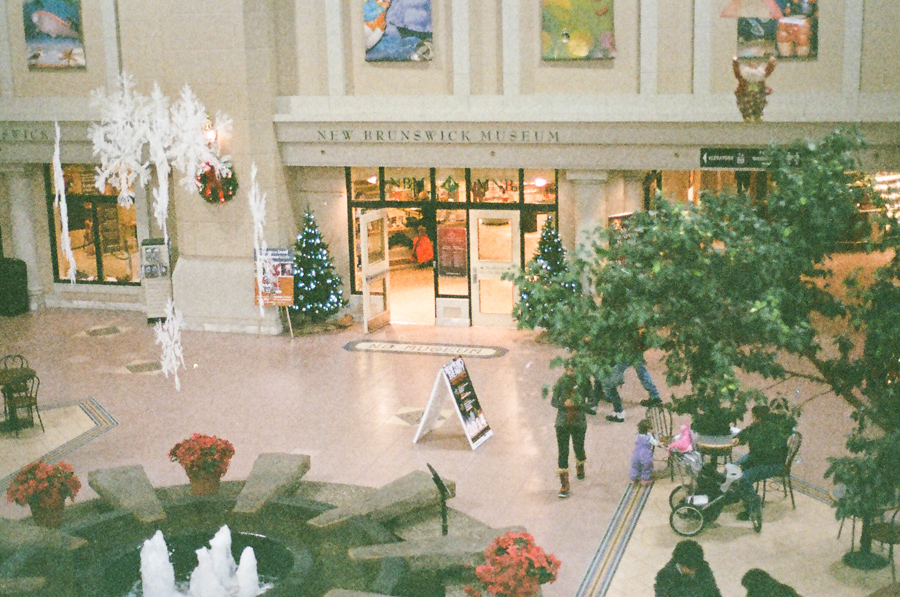 Walter always loved the New Brunswick Museum. I have fond memories visiting it with him. I also remembering him telling me how this museum was constructed one year when the government had “loads of money”. Previously, the space had been part of the mall with restaurants, etc. 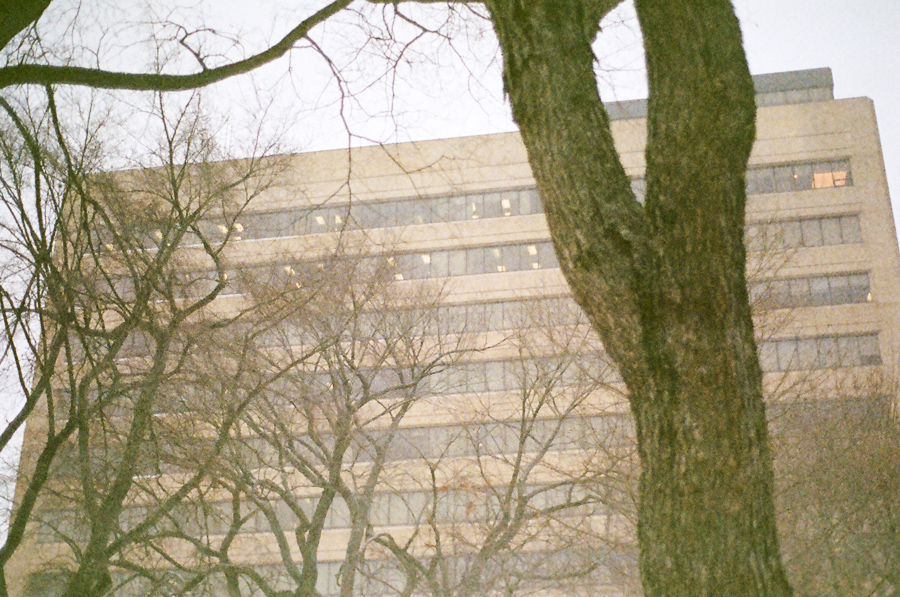 Walter once worked for Irving and had many stories to tell of his time there. 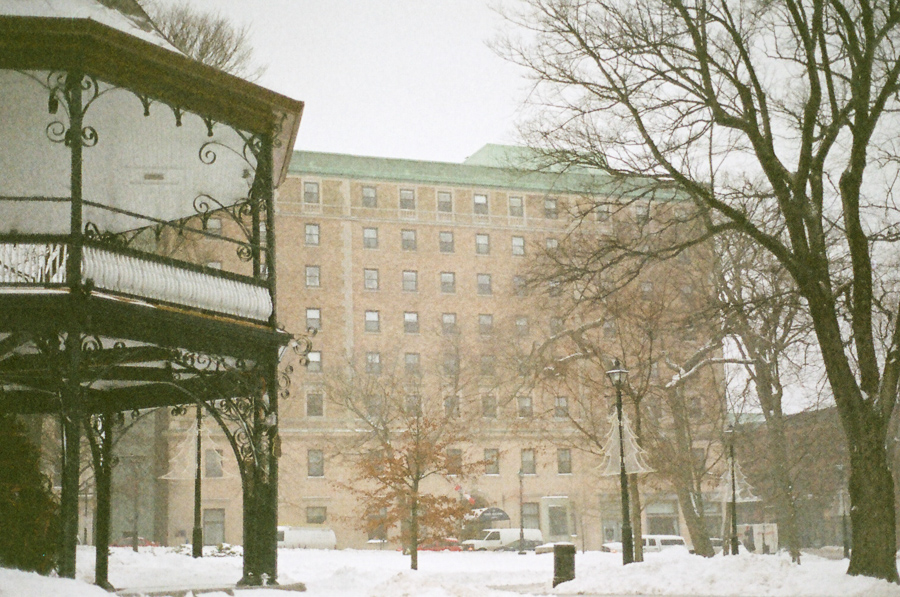 This section of King’s Square hasn’t changed much in 100 years. Many of the buildings around have changed though. 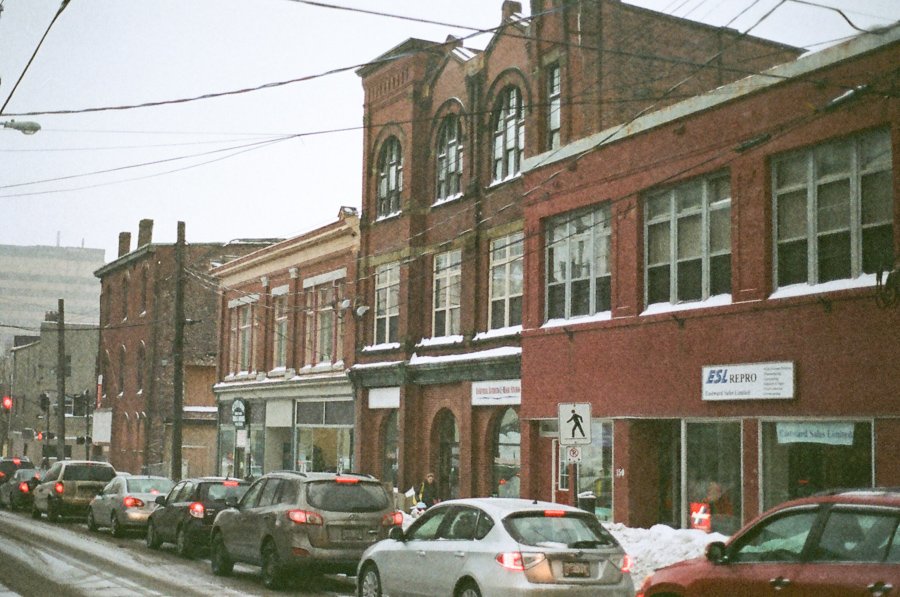 Walter knew lots of history of many properties in Uptown Saint John. The prominent building in the centre of this photo used to be a fire station. Just down the street, the buildings have changed functions many times, but you can actually still see pieces of metal sticking out of the wall high up where retail signage used to be mounted. 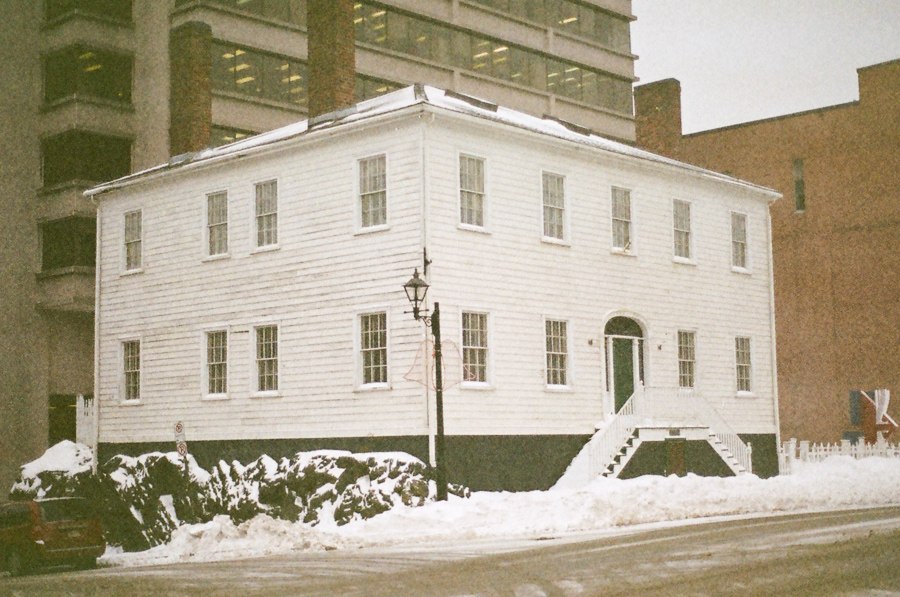 The only time I have ever visited the Loyalist House was with Walter and his wife back in the 90’s. We happened to be there for the Mayor’s Tea. 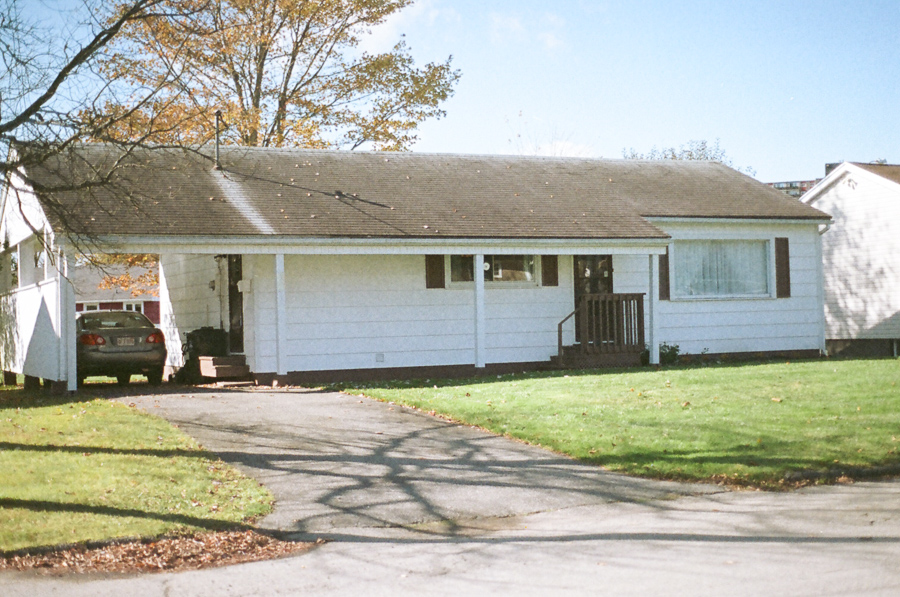 Walter and my mother grew up in this house. My grandmother has lived there for 55 years. 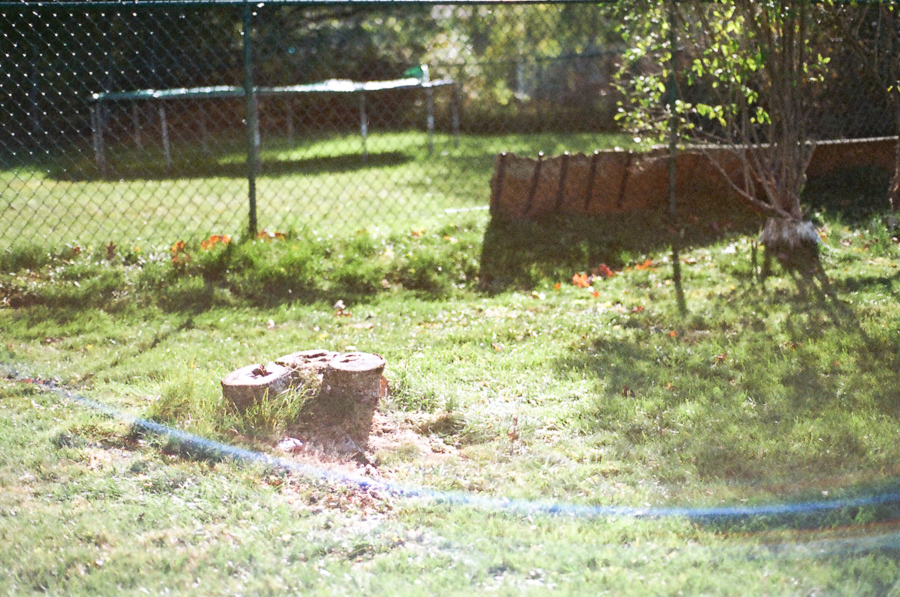 This is my grandmother’s backyard. Something about this image seems peaceful to me. 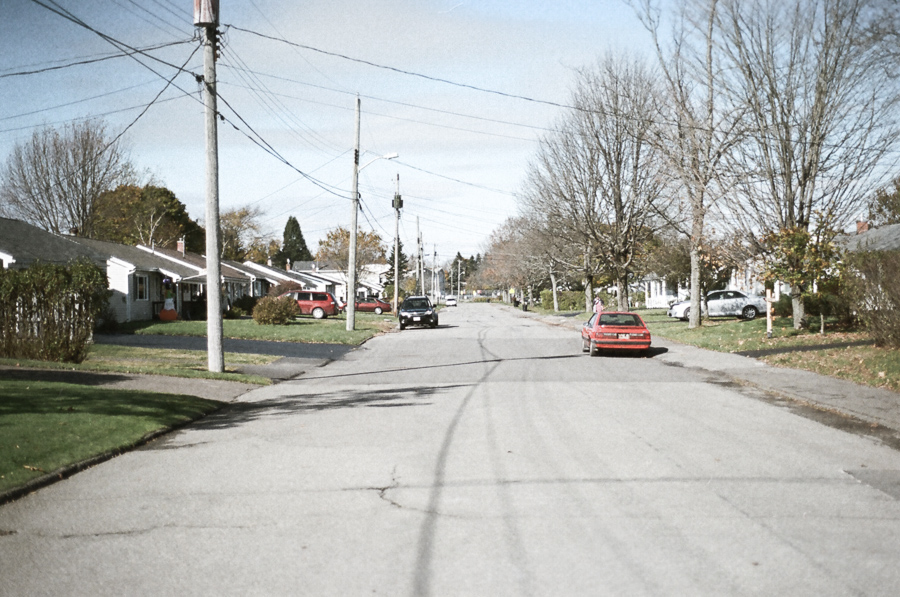 My grandmother’s street. At the end of the road is an elementary school where Walter, my mother, and I all attended. 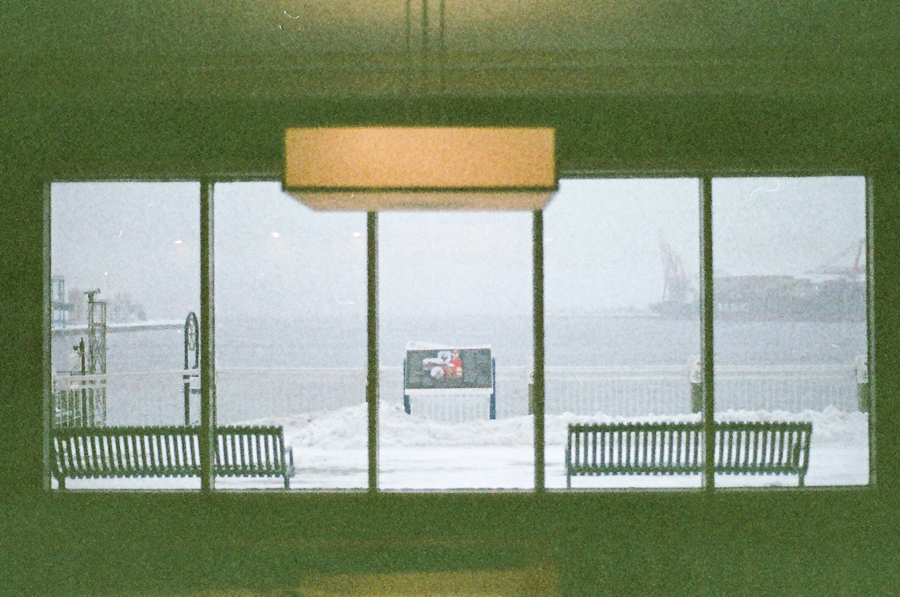 Walter and I ended up doing our photo walk on a snowy day, much like this, in Uptown Saint John. I came back to the same spot to take this picture, but it’s not the same. 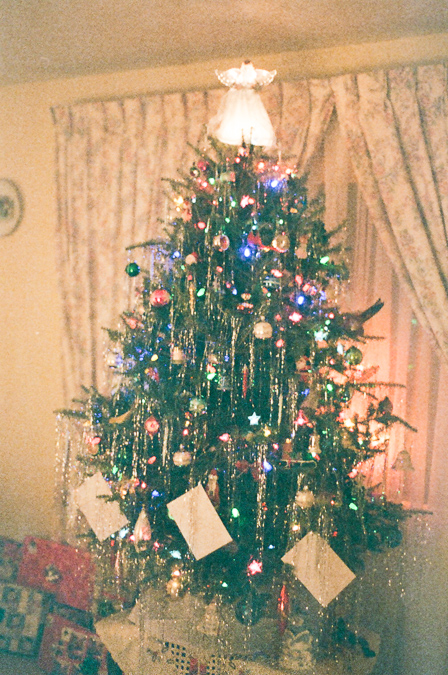 This year, my grandmother (Walter’s mother) decided to put up a smaller Christmas tree, and move it to the centre of the room to allow guests to view the corner cabinet made by Walter. 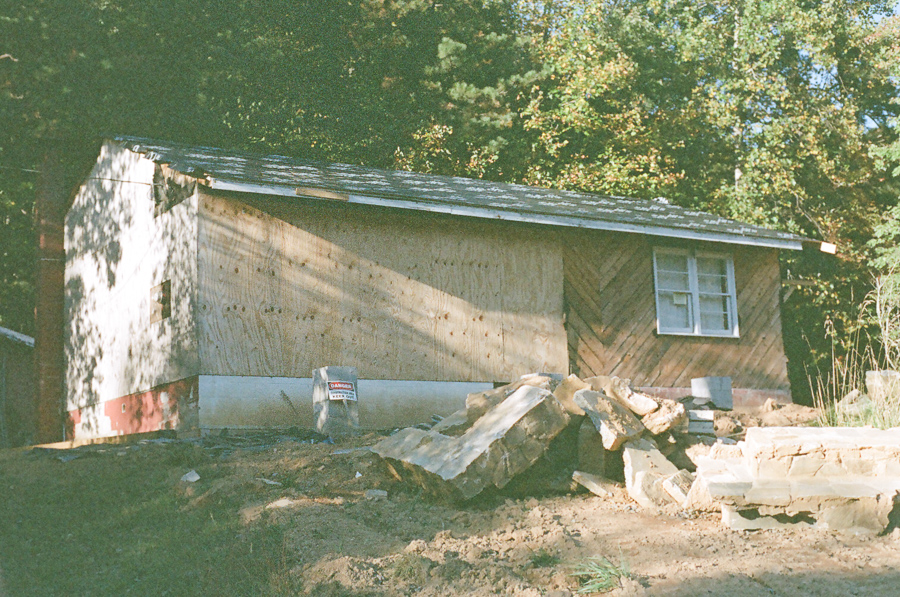 Walter’s house, as he left it. He had grand plans for this place. He was only weeks away from constructing the front patio. 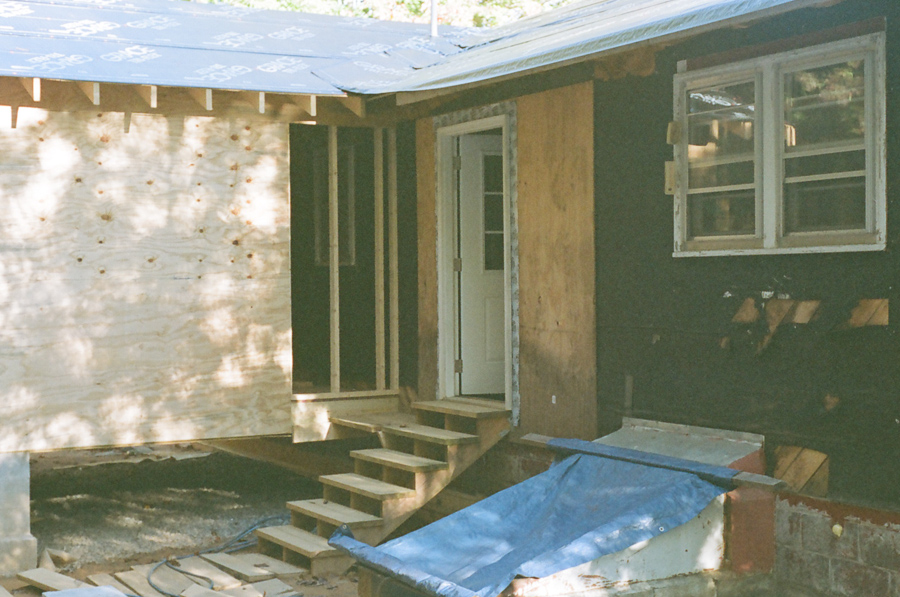 The back entrance is rustic, yet still very inviting. The basement is secured by a blue tarp. 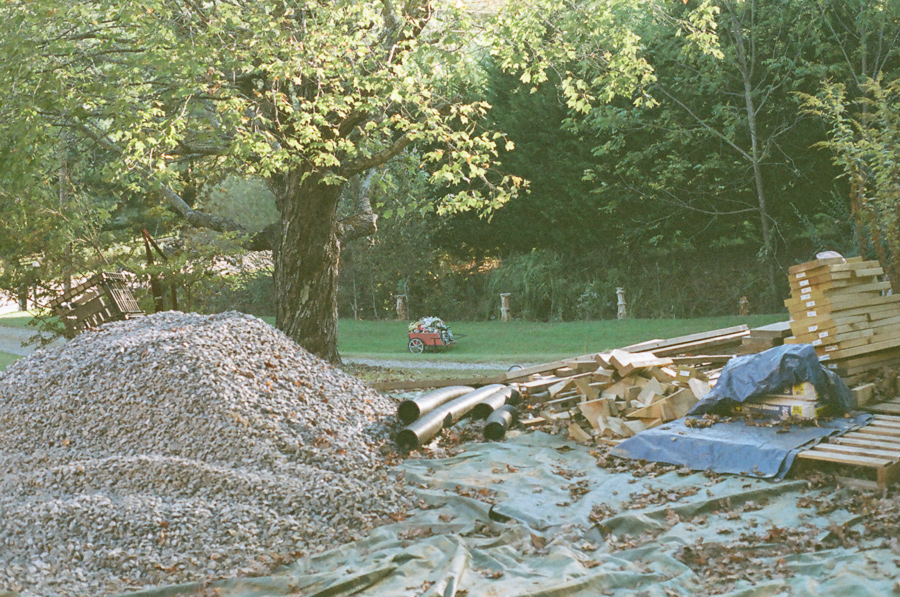 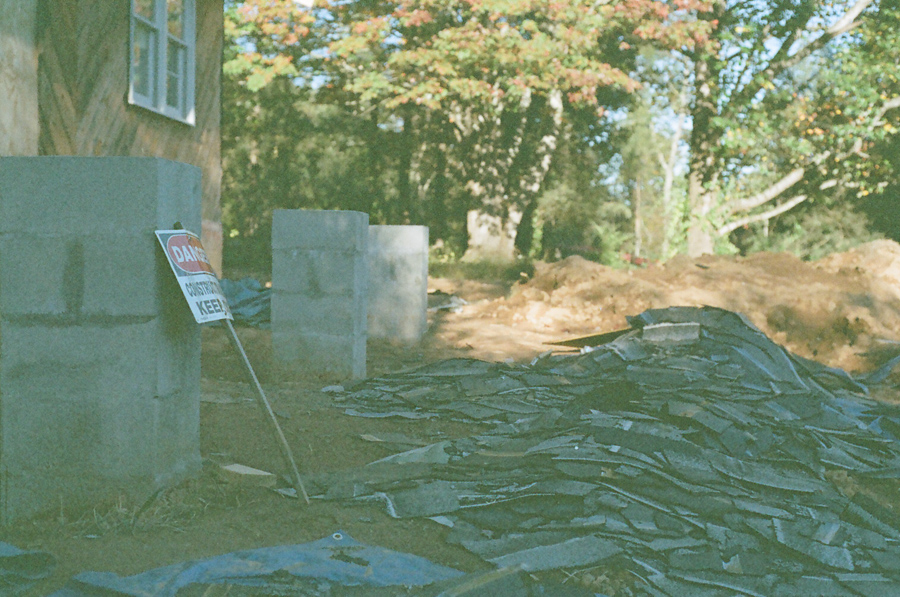 The roof was stripped, but not yet replaced when Walter passed away. 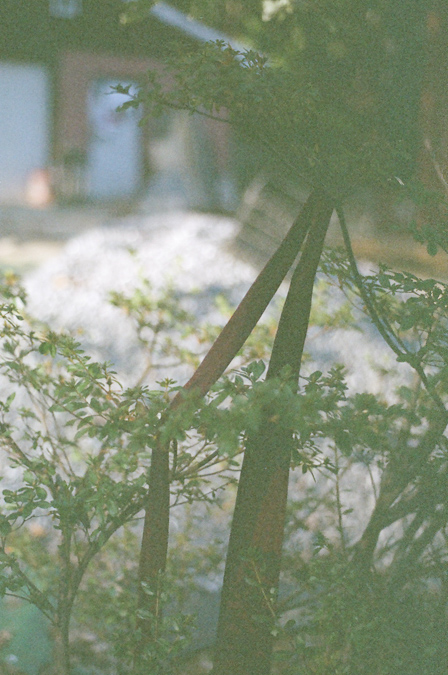 For some reason, one of Walter’s ties was hanging from a tree. I can only imagine how it got there.

The next set of photos were taken by Walter himself. Since the film sat in storage for decades, there was lots of degradation of photo quality. The photo lab even added a comment that these rolls were very aged. 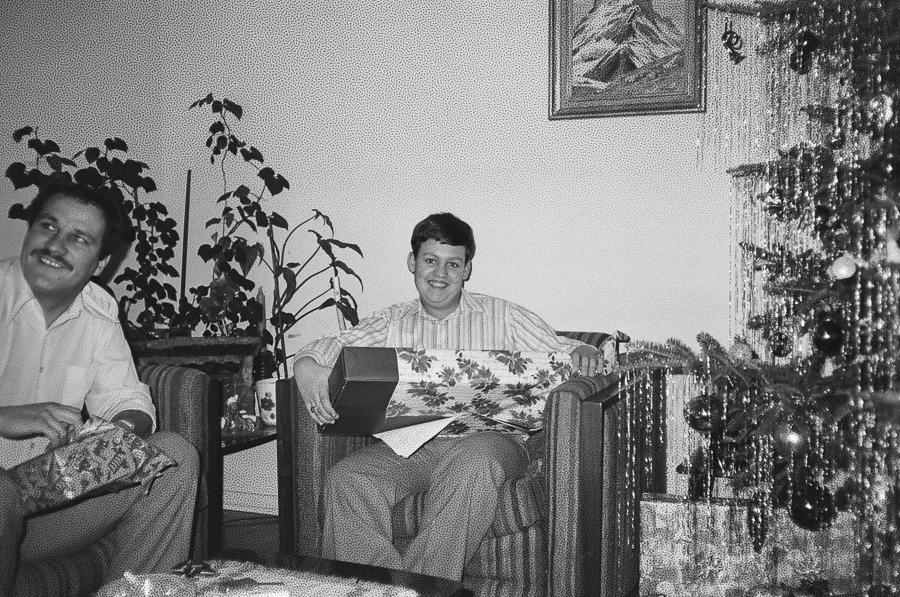 My uncle, at a young age, at Christmas time. 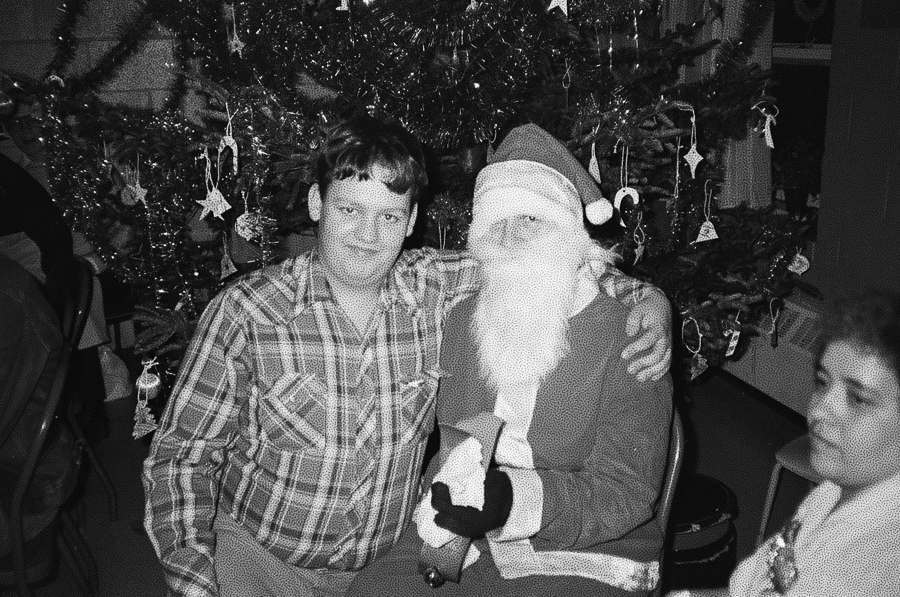 My uncle posing with Santa Claus. 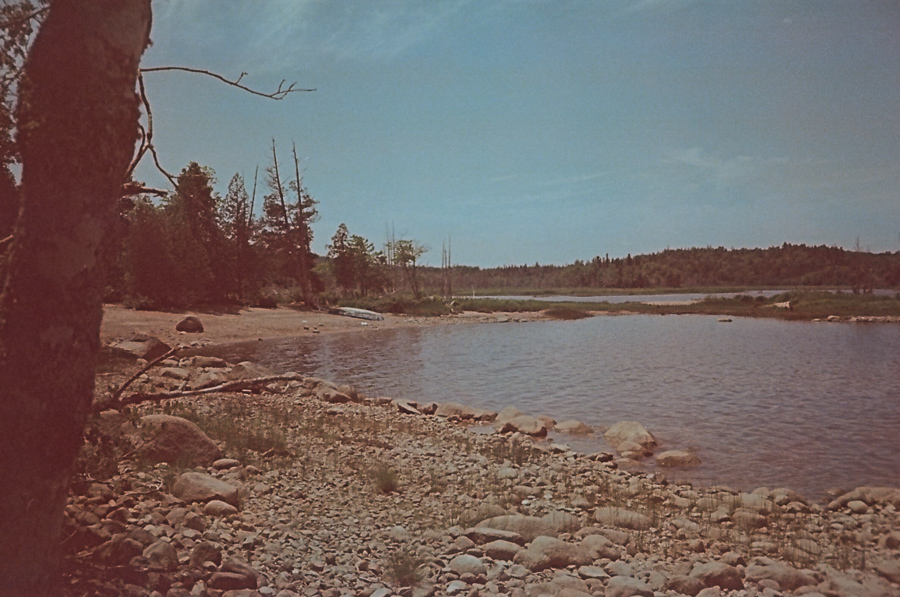 I presume that this shot was taken somewhere at Lake Utopia, where my family has owned a cottage for decades. 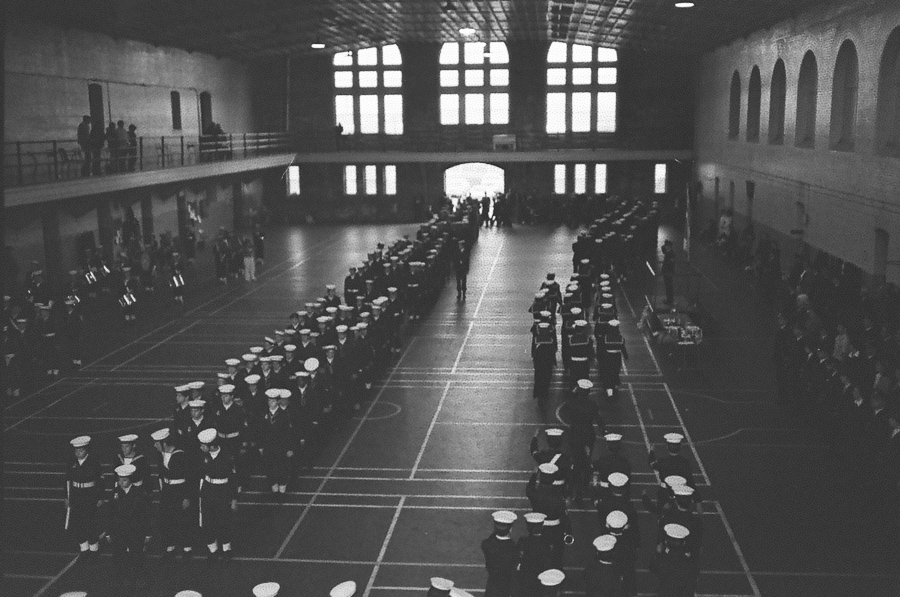 My uncle was very active in the Rodney Sea Cadets for many years. He would photograph their ceremonies, develop the photos into prints, and deliver them to attendees before the ceremony was even over. 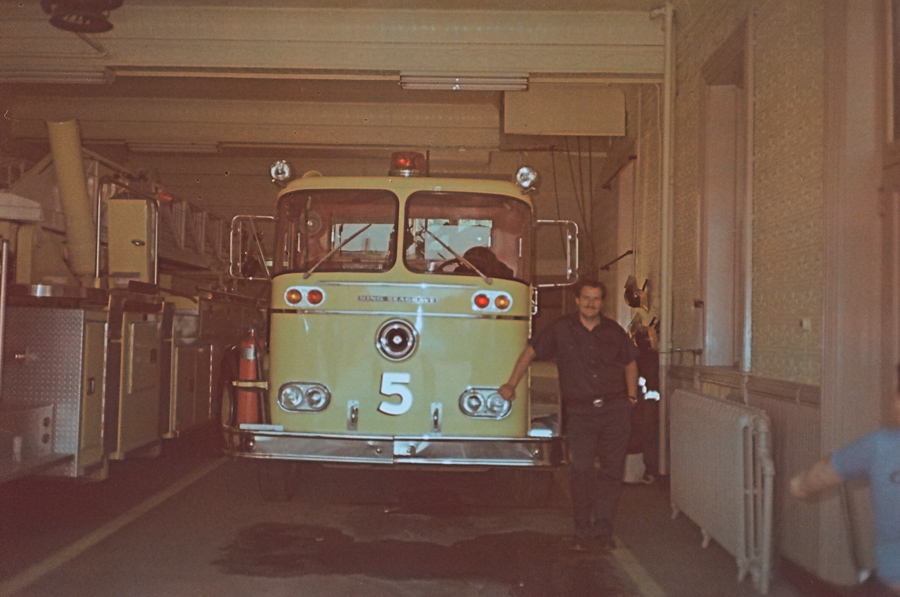 This is my father, many years ago, in a fire station. 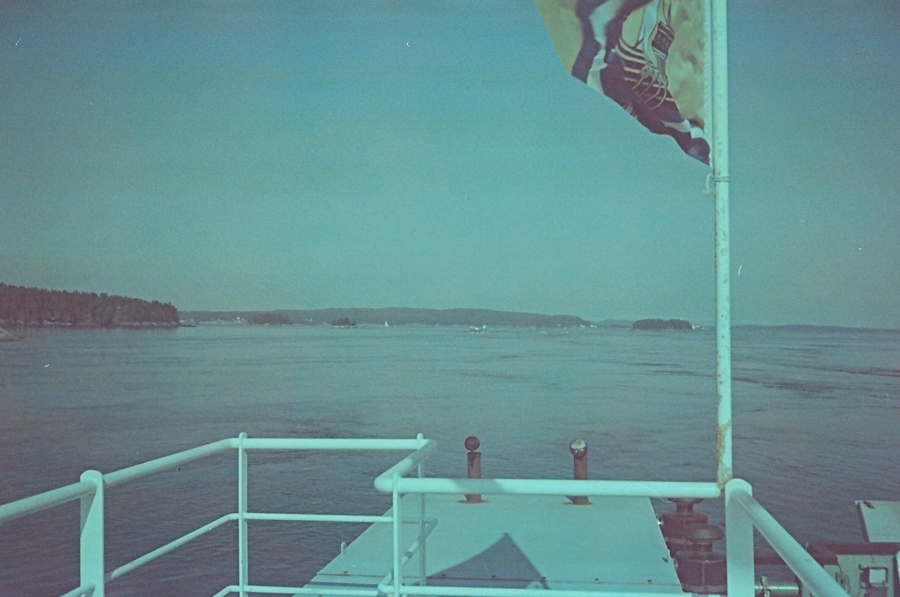 This is the ferry to Deer Island. Despite being a short distance from my family’s summer cottage, I only visited this island once, and that was with Walter. 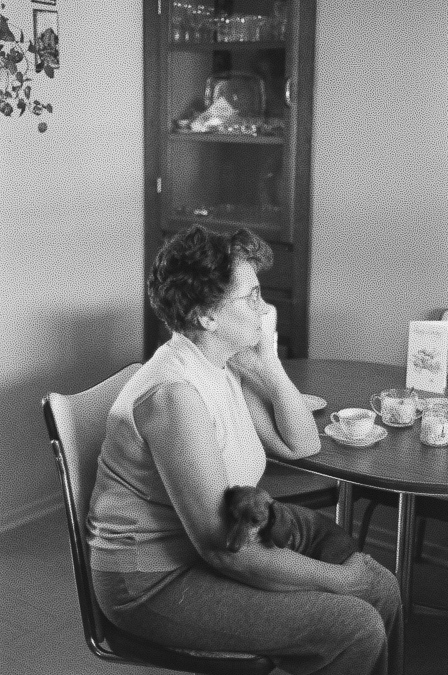 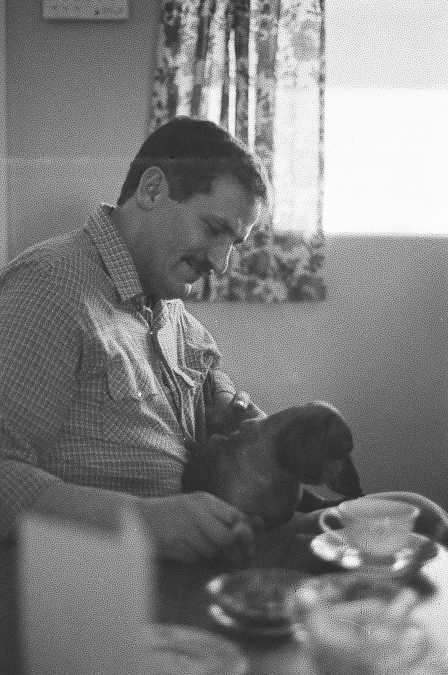