The Dongmen Pedestrian Street is known as Shenzhen’s original shopping mall. It’s a very busy maze of streets with hundreds of shopping options for those seeking clothing, street food, and electronics, although there is also a handicraft market, a street of vendors all selling neon signs, and more. The area is one of the oldest parts of Shenzhen, first being established 300 years ago, although I imagine the bulk of its growth has occurred since the 1970’s.

I visited this area a couple of times, although mostly at night, since it was an hour away from my hotel by train. 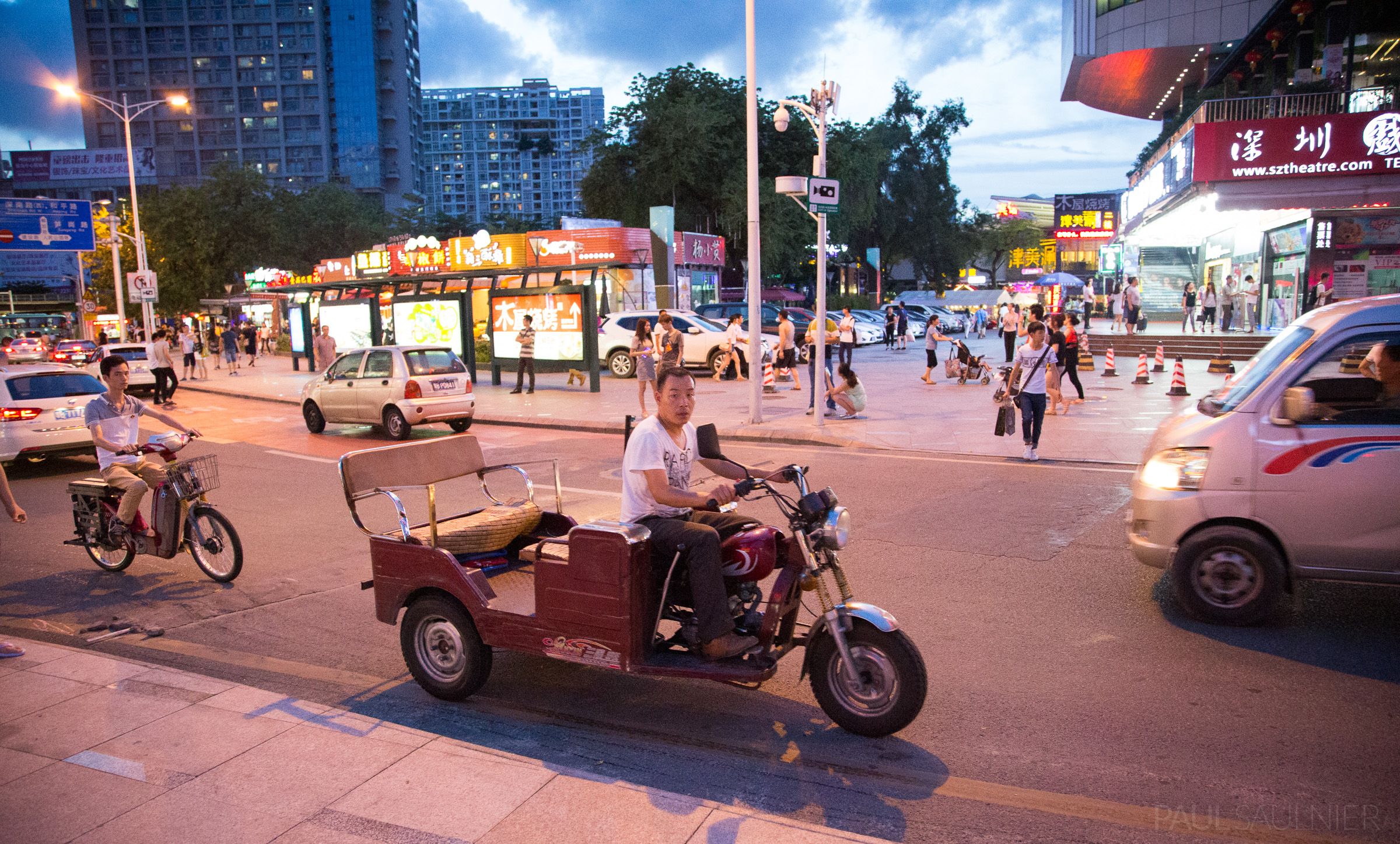 If you’re too tired to walk, many guys like this would be happy to transport you anywhere (for a fee of course). 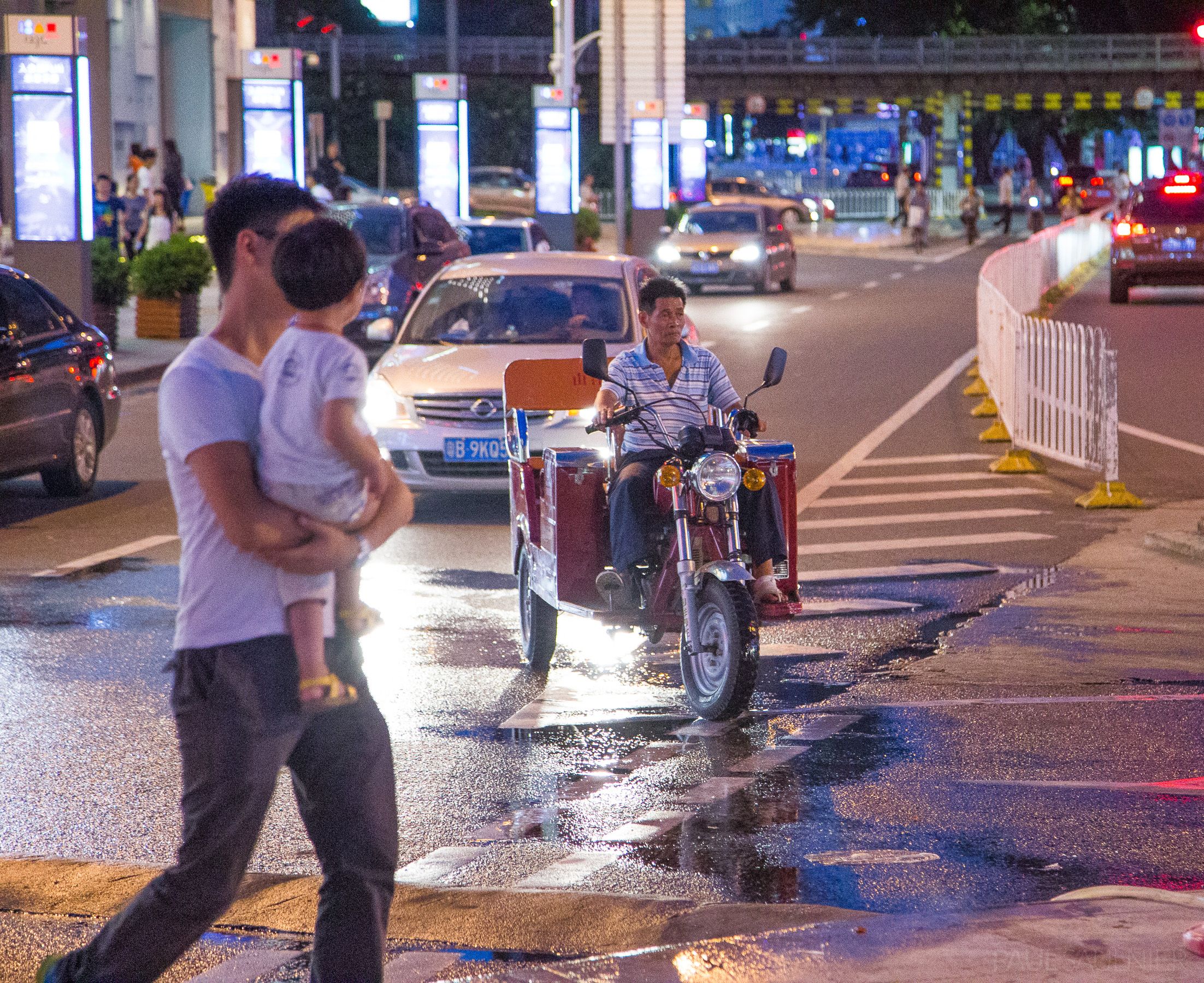 Pedestrians, cyclists, motorcycles, and scooters seem to mix often with the cars, and go wherever they want in China. 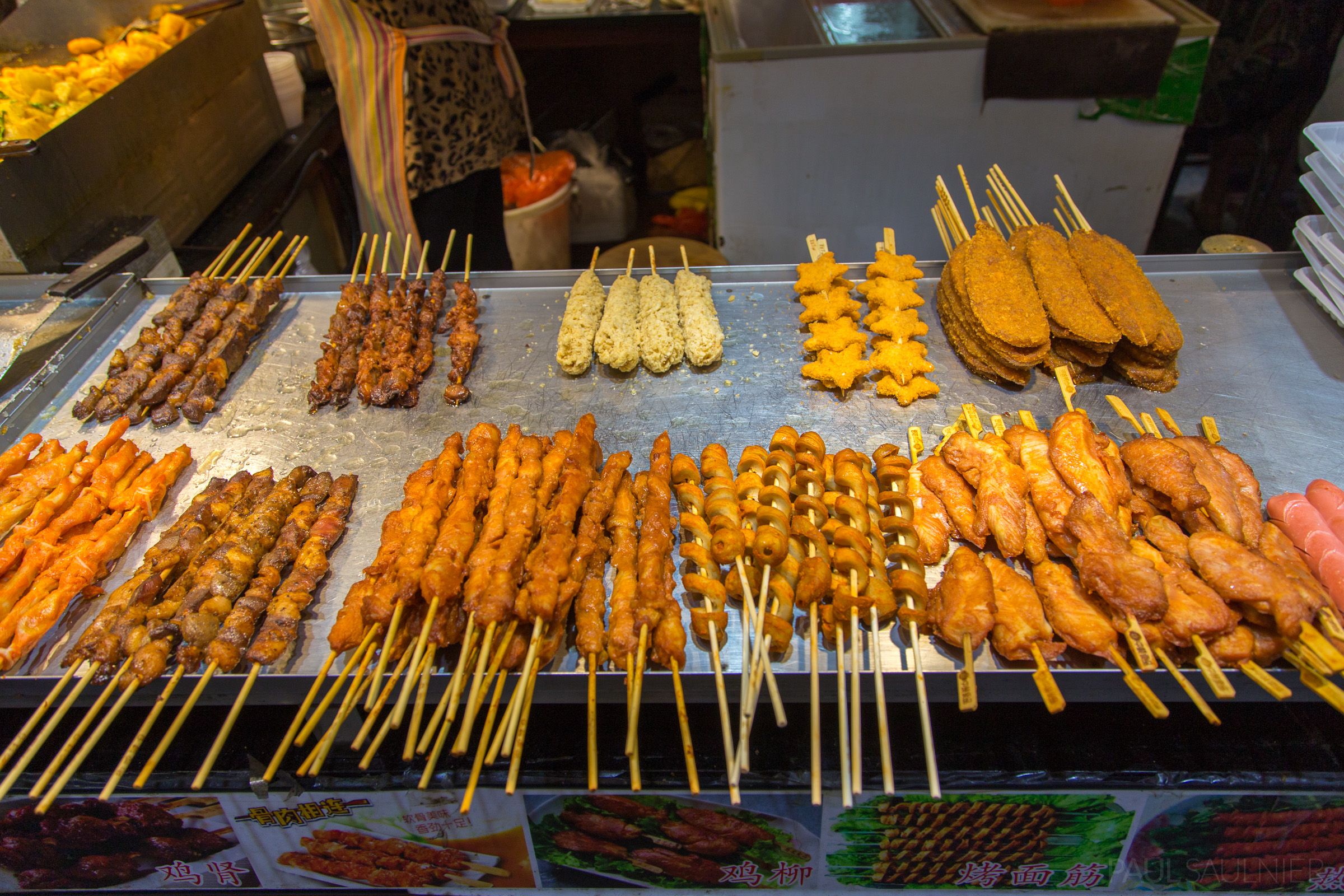 Dongmen is one of the best places in Shenzhen for street food. 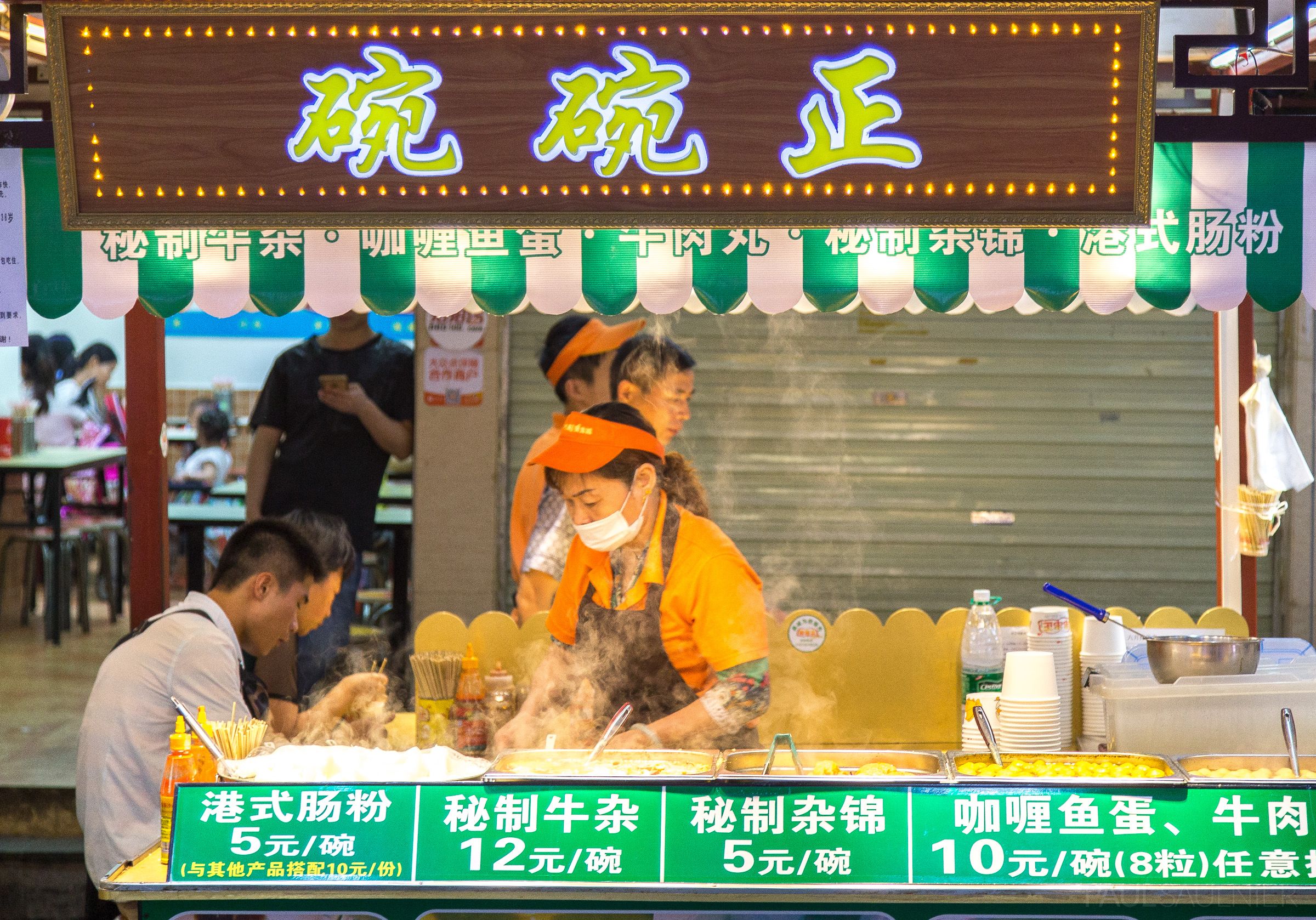 Everything you might want to eat is made fresh, right in front of you. 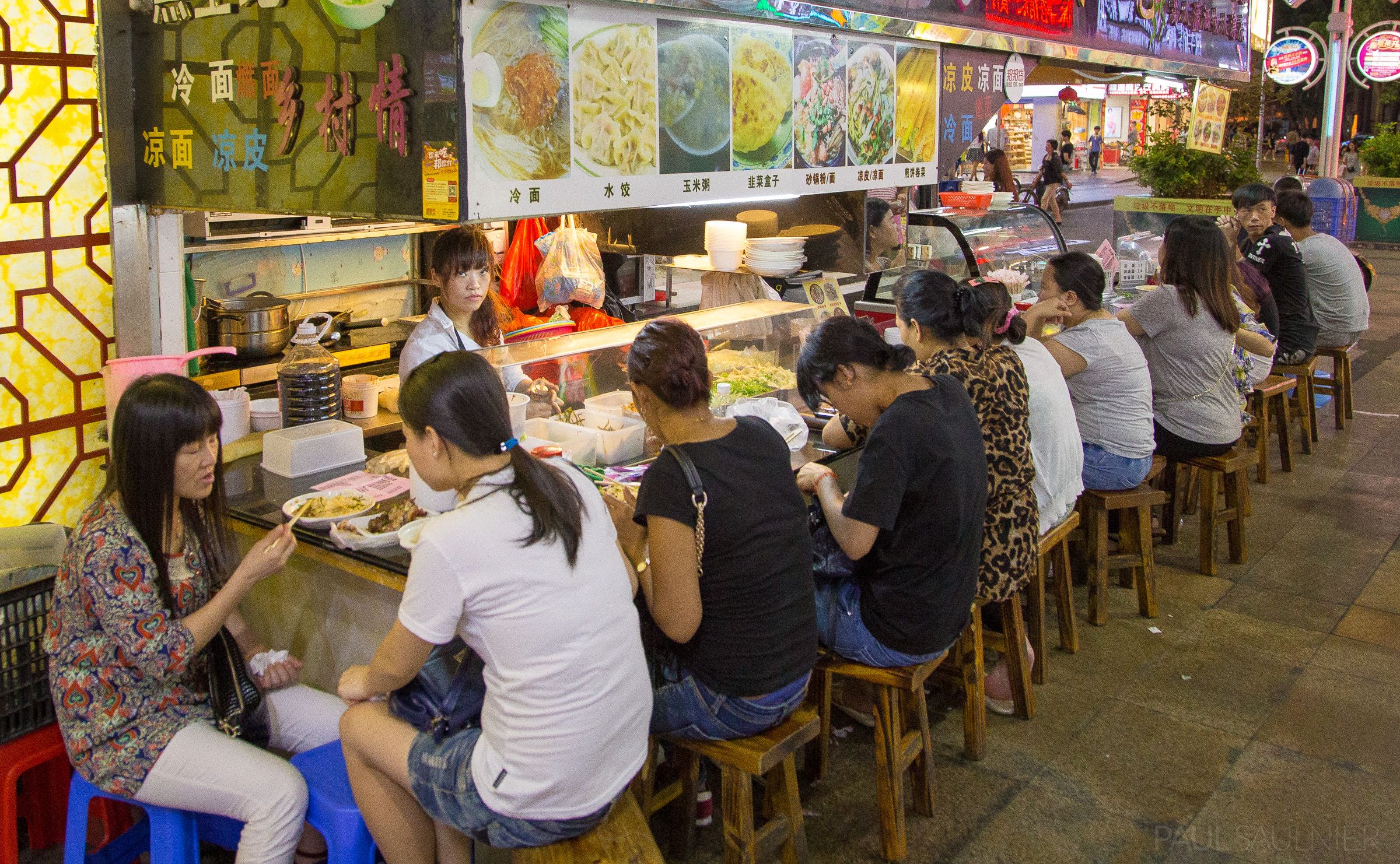 Some stalls also have stools allowing you sit and eat there, which is good since there aren’t many places to sit elsewhere. The lady behind this stall didn’t seem overly amused by my camera. 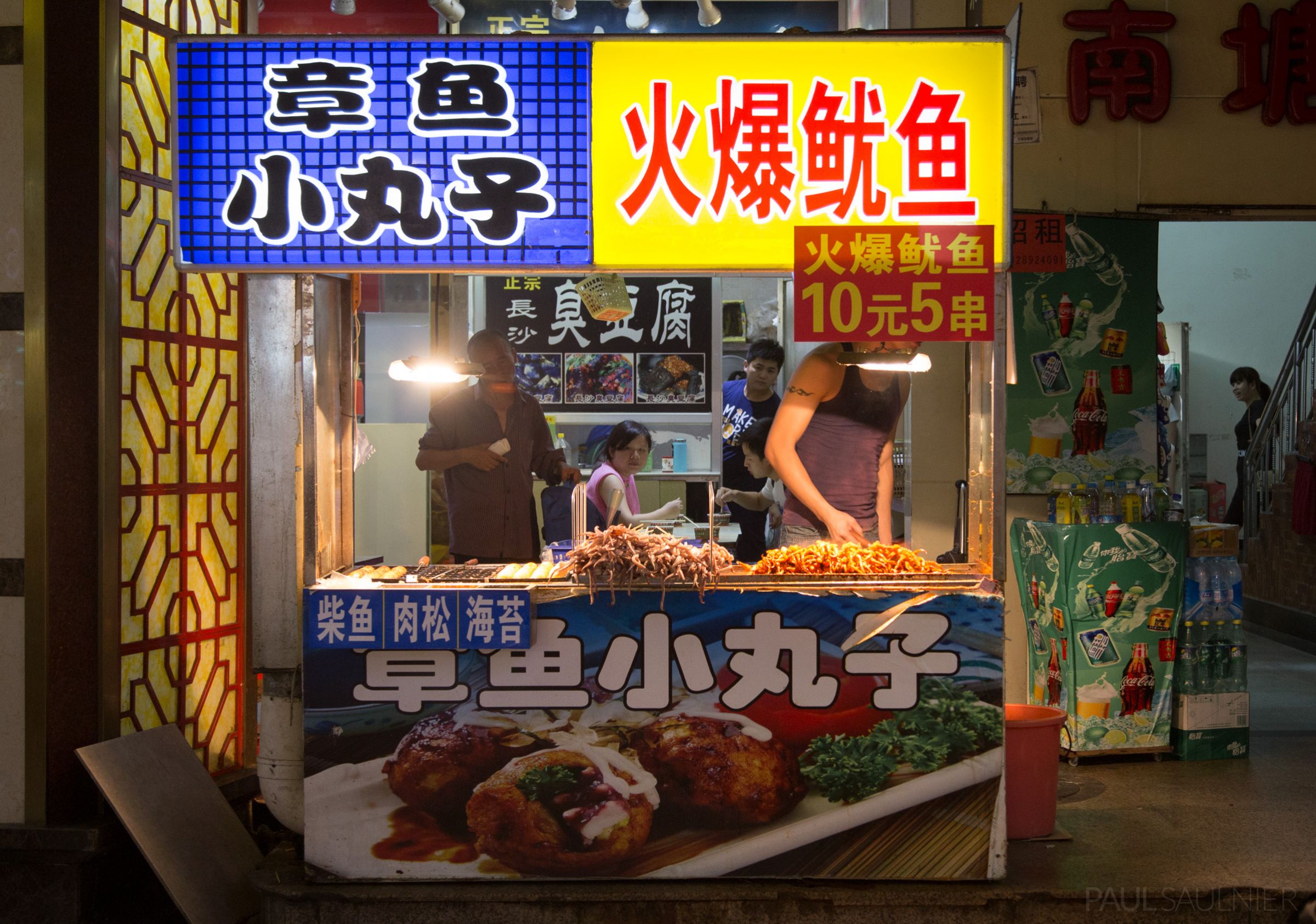 Each food stall generally specializes in only a few things, which seems to be a common approach for many types of businesses in China 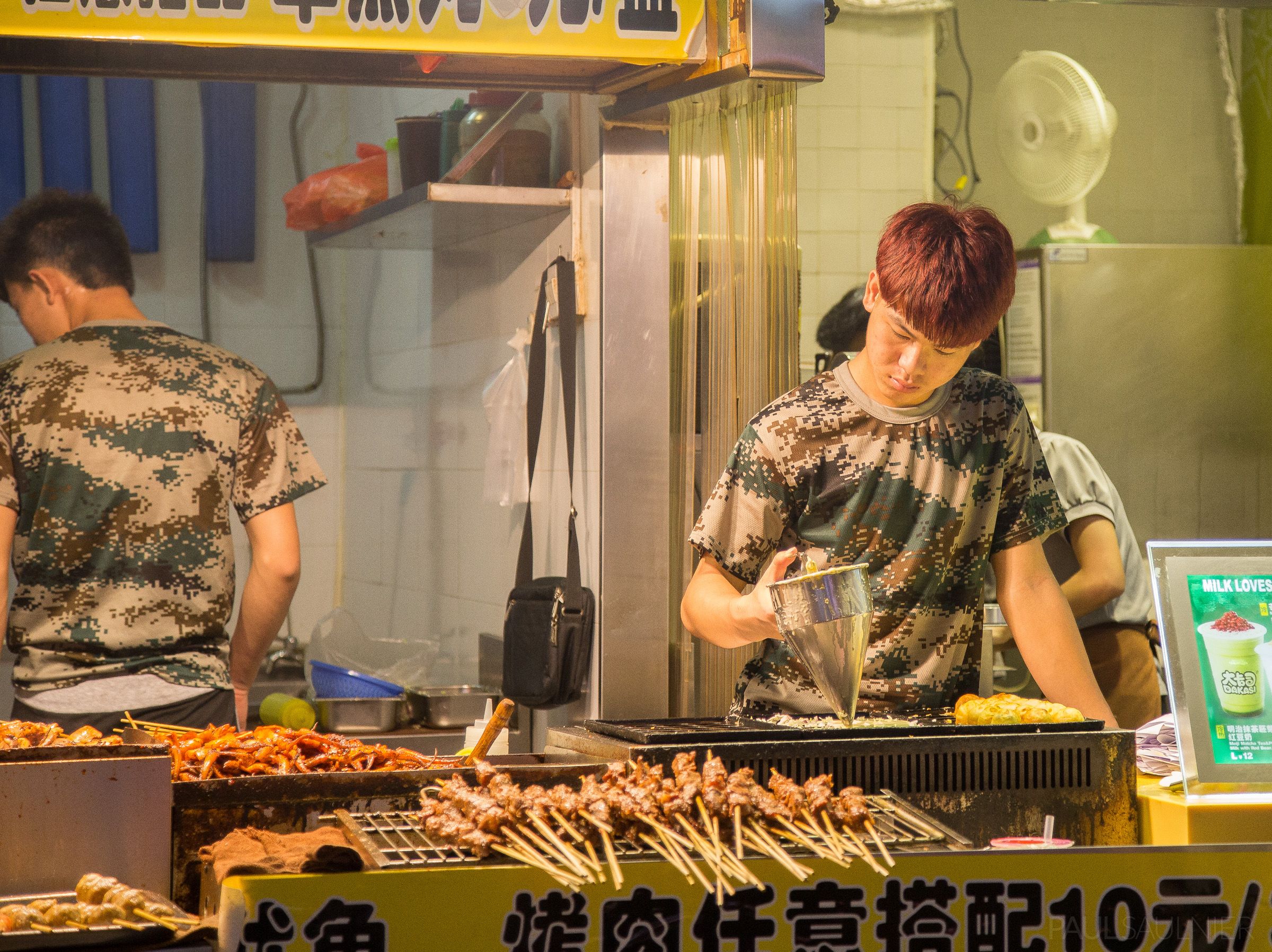 A lot of the street food is sold on sticks for easy carrying and consumption, perhaps due to the lack of many places to sit nearby. 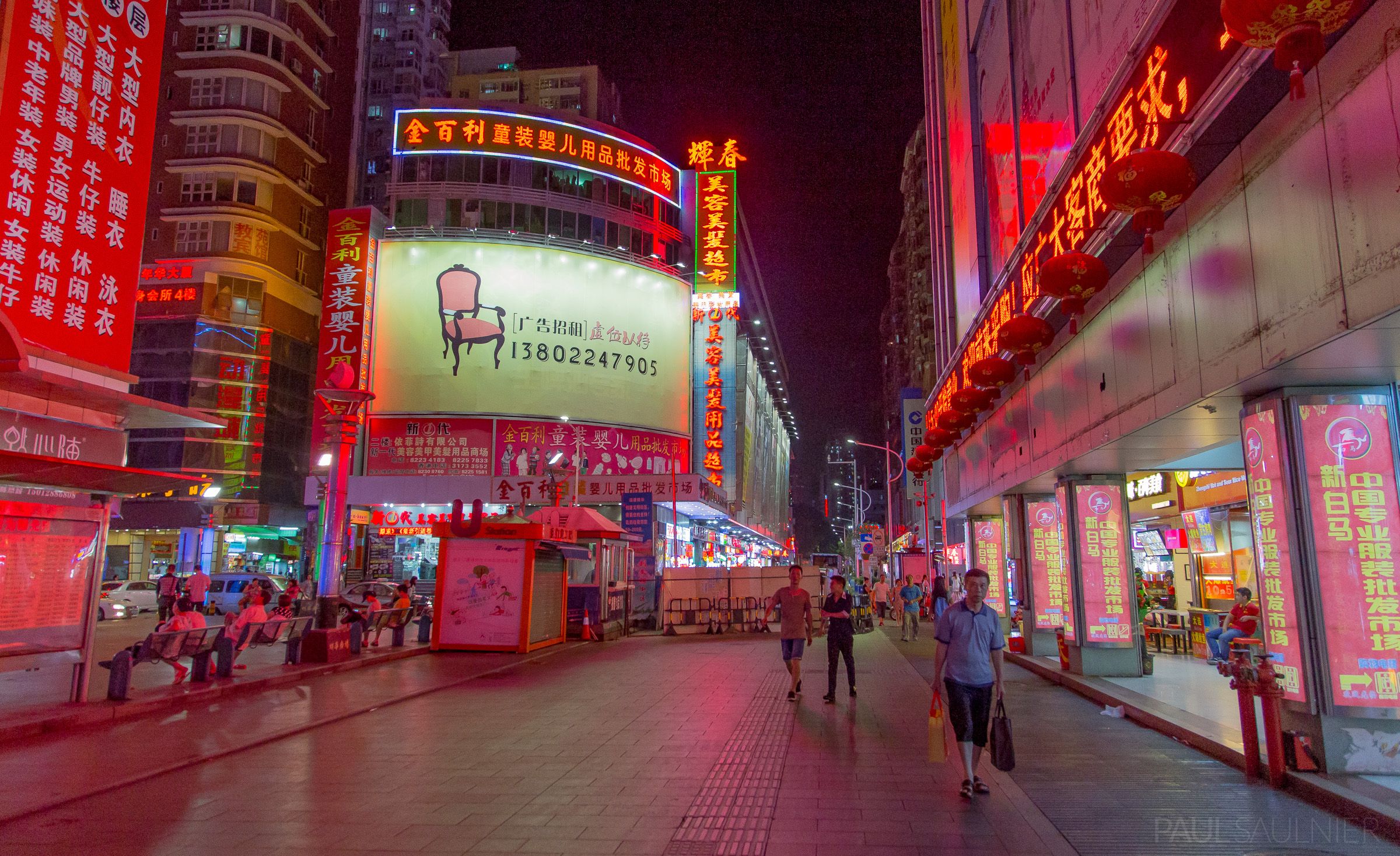 The neon signs on many businesses glow through the night as far as I know, or at least until midnight or so when most businesses are closed. The signage on this street gives it a very distinct red glow.

A half dozen locals are sitting and relaxing on the benches. All have removed their shoes. 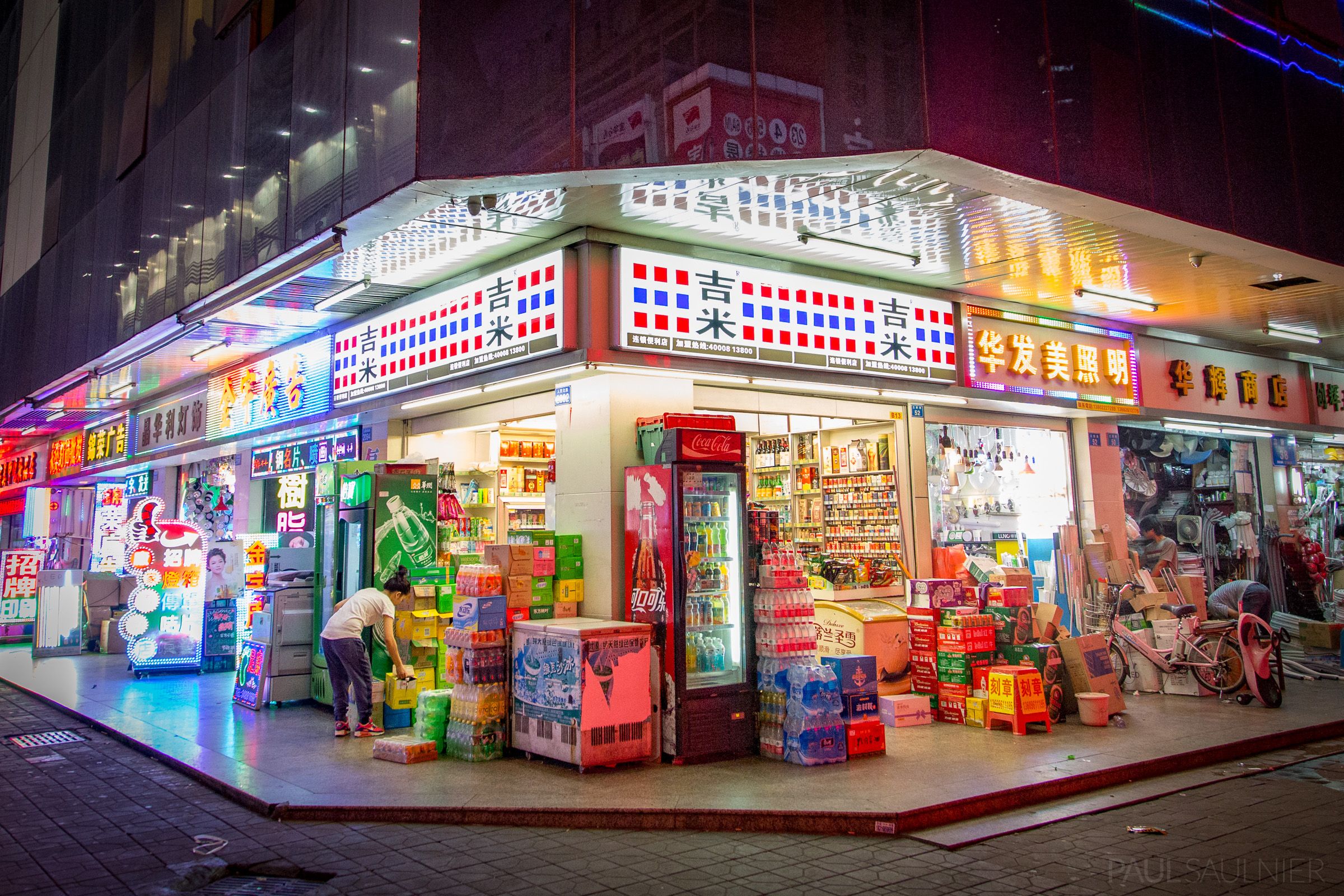 Convenience stores like this are everywhere in every neighbourhood of Shenzhen. 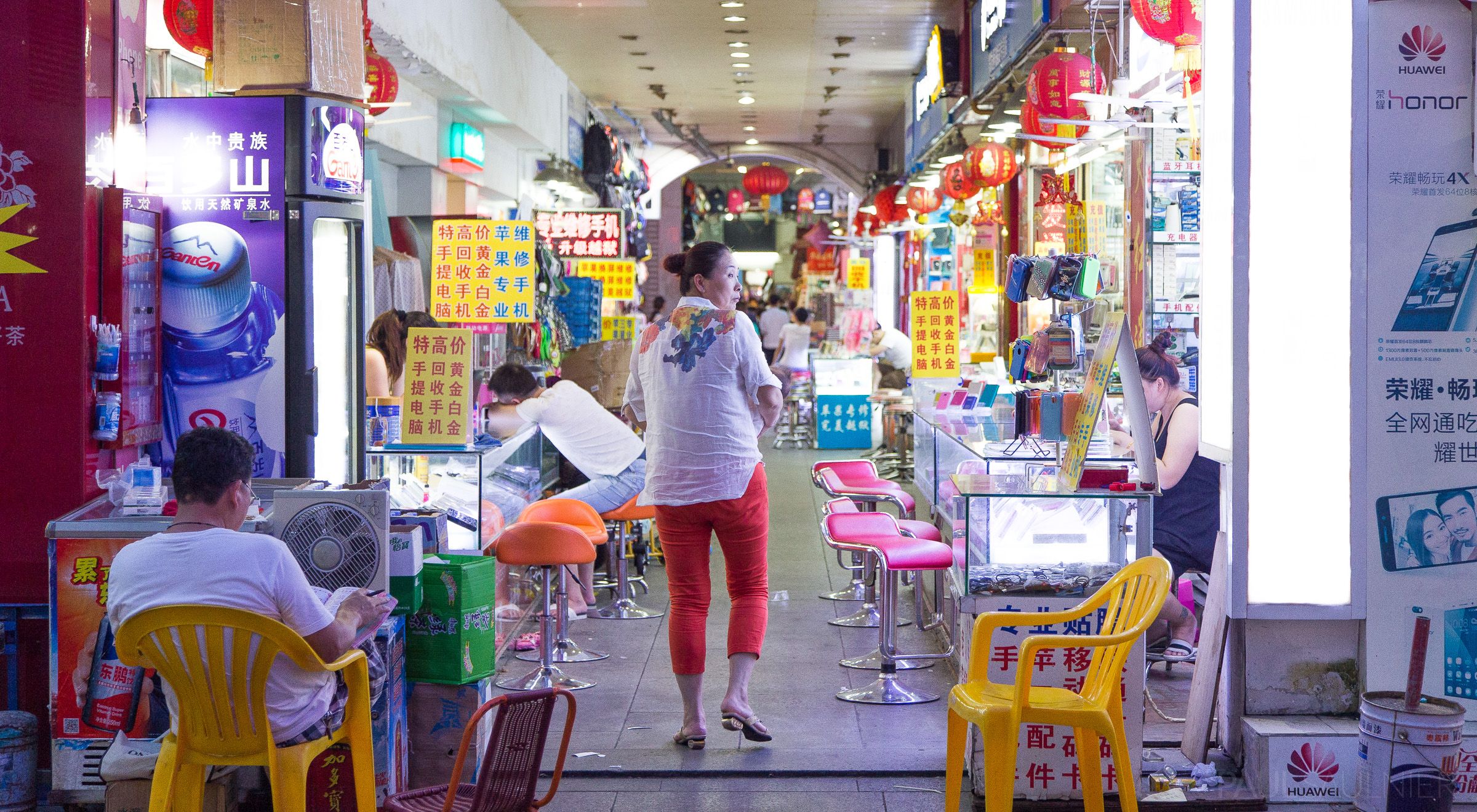 A woman stands at the entrance of the only electronics market that I found in Dongmen. 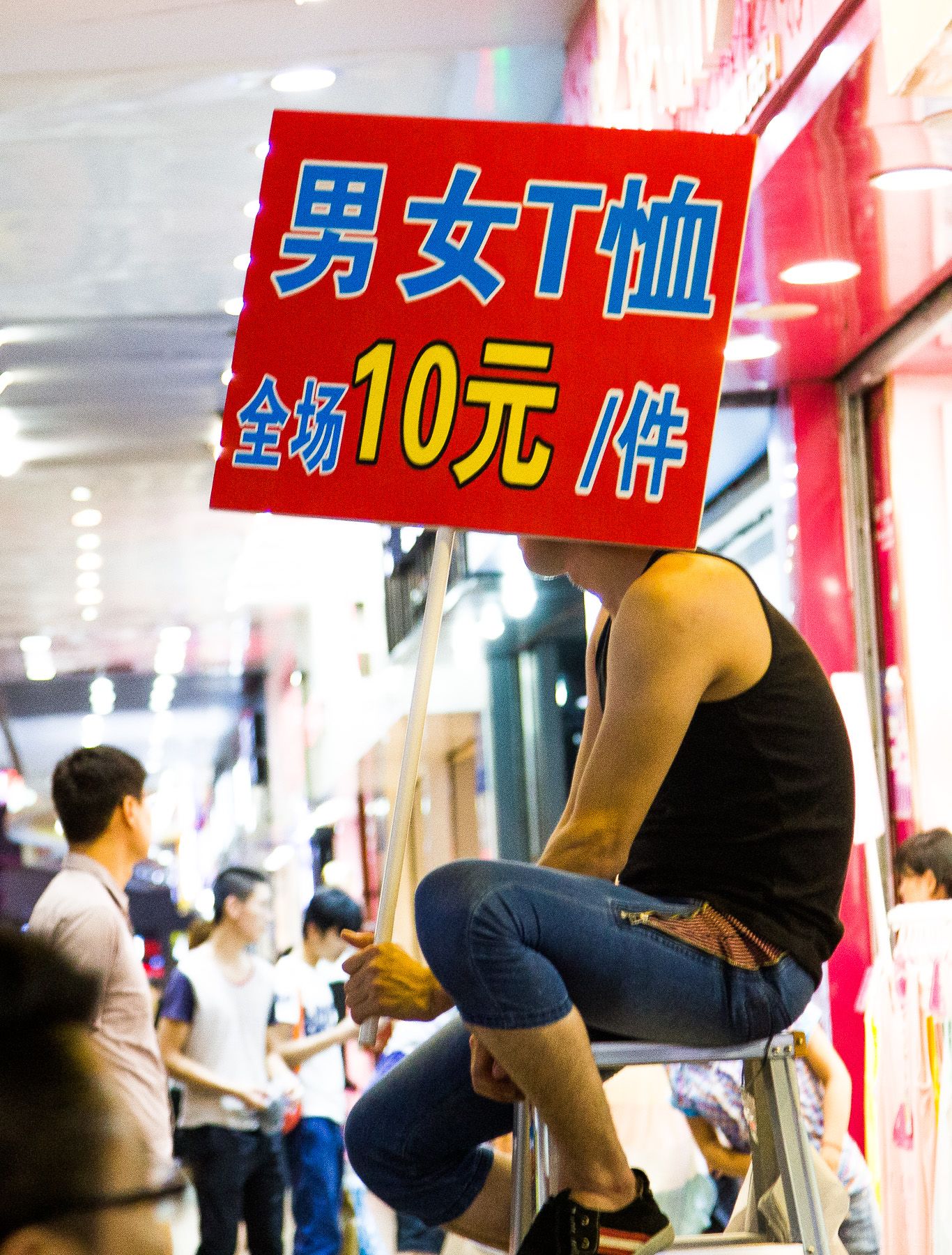 Some stores hire people to hold signs to advertise their products in addition to have many sales staff inside the stores. This person saw me coming and hid behind the sign. 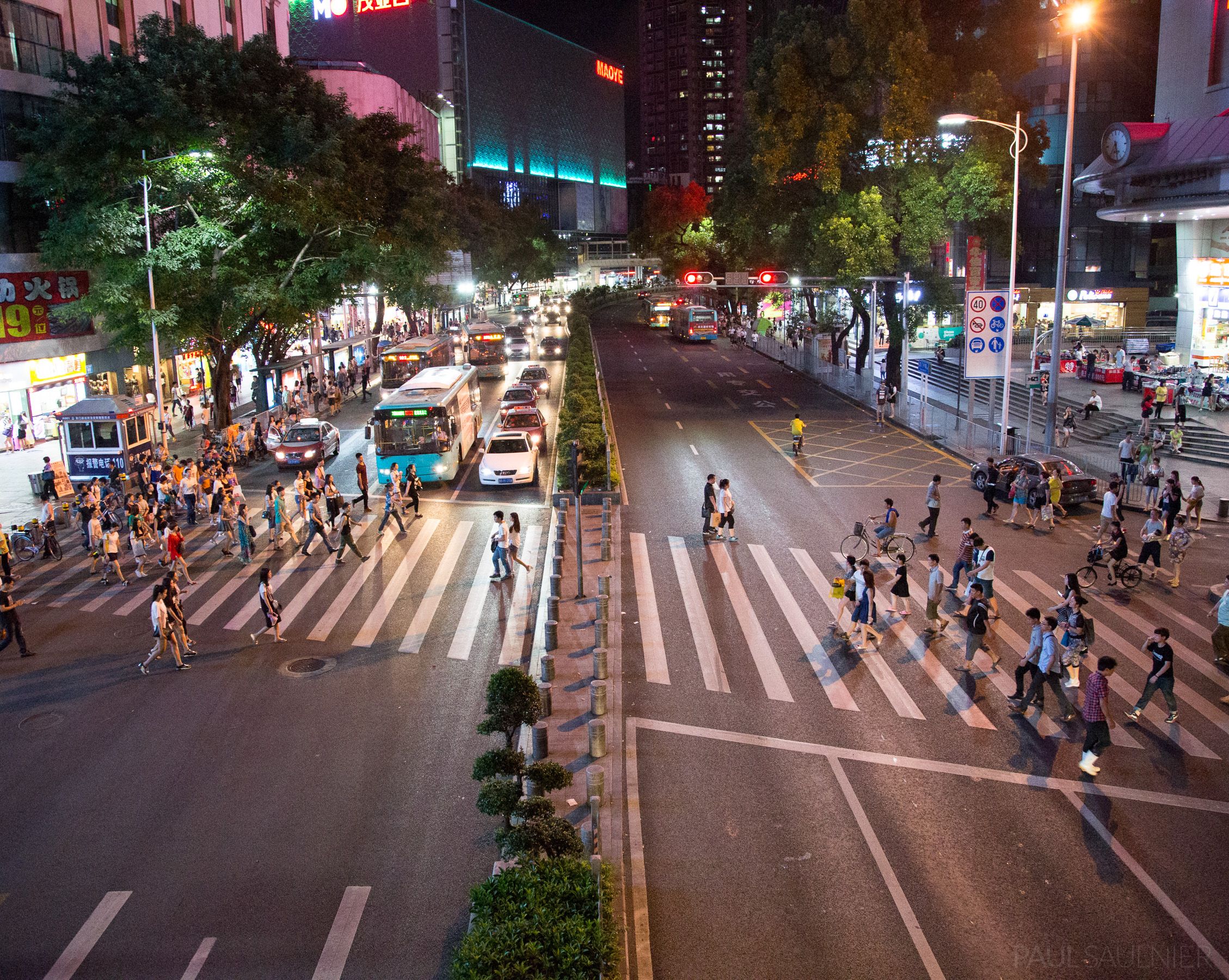 It doesn’t take long for dozens of pedestrians to gather, waiting to cross the street. 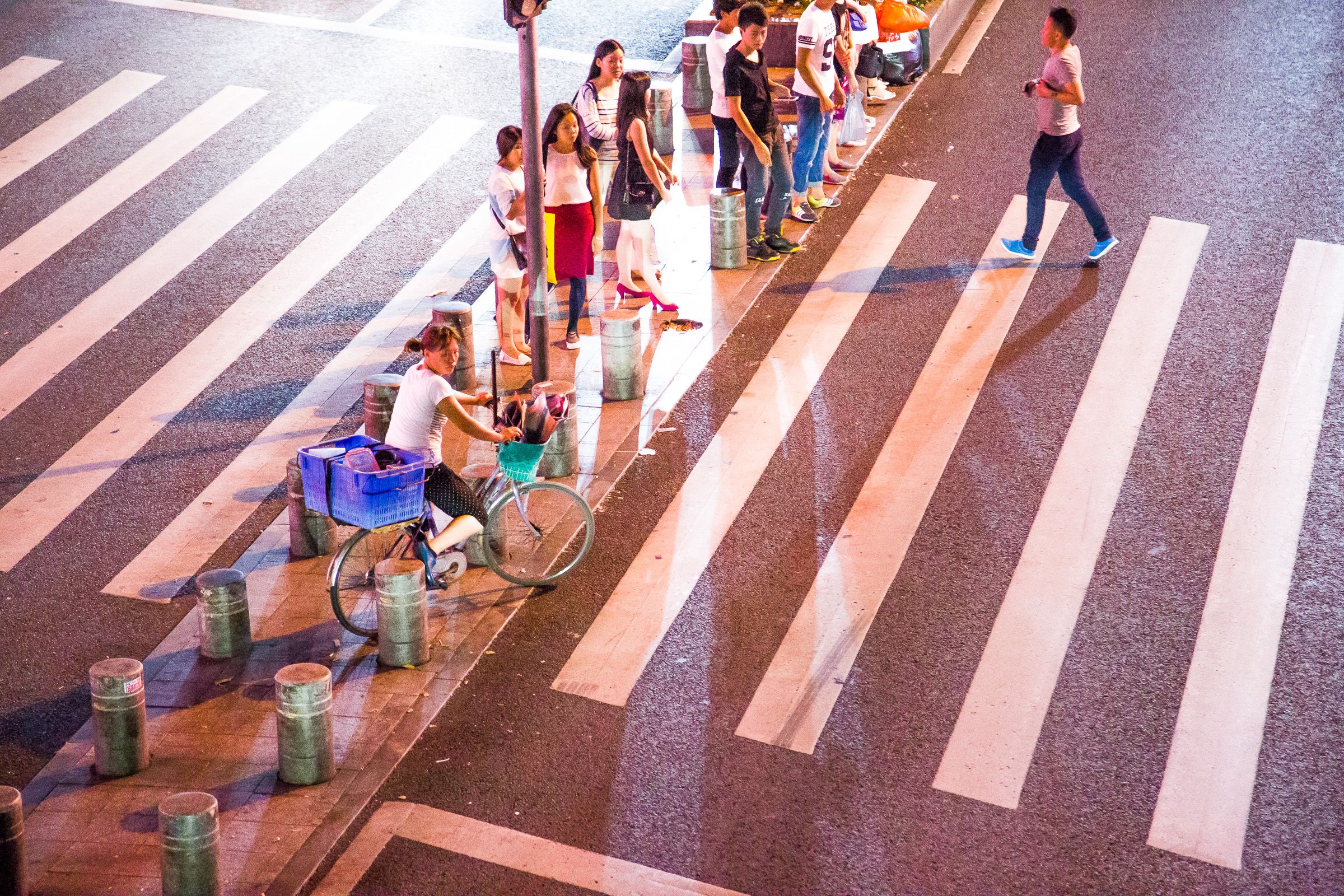 Some people don’t cross the street fast enough, and have to wait in the middle. Or some people just cross when one side is empty, ignoring the signals. 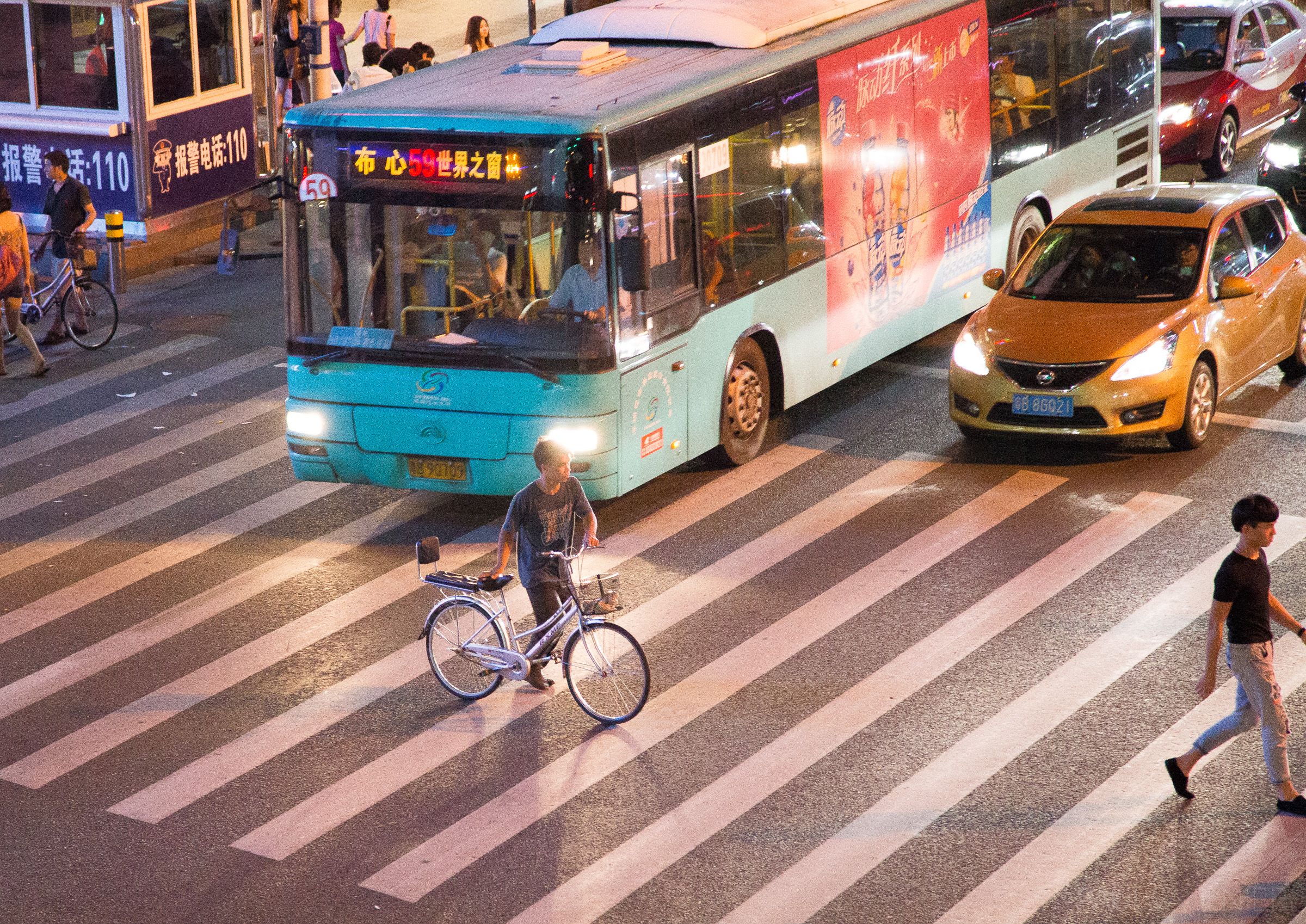 This cyclist crossed a little too late. The city bus certainly didn’t wish to wait for him to get out of the way entirely. 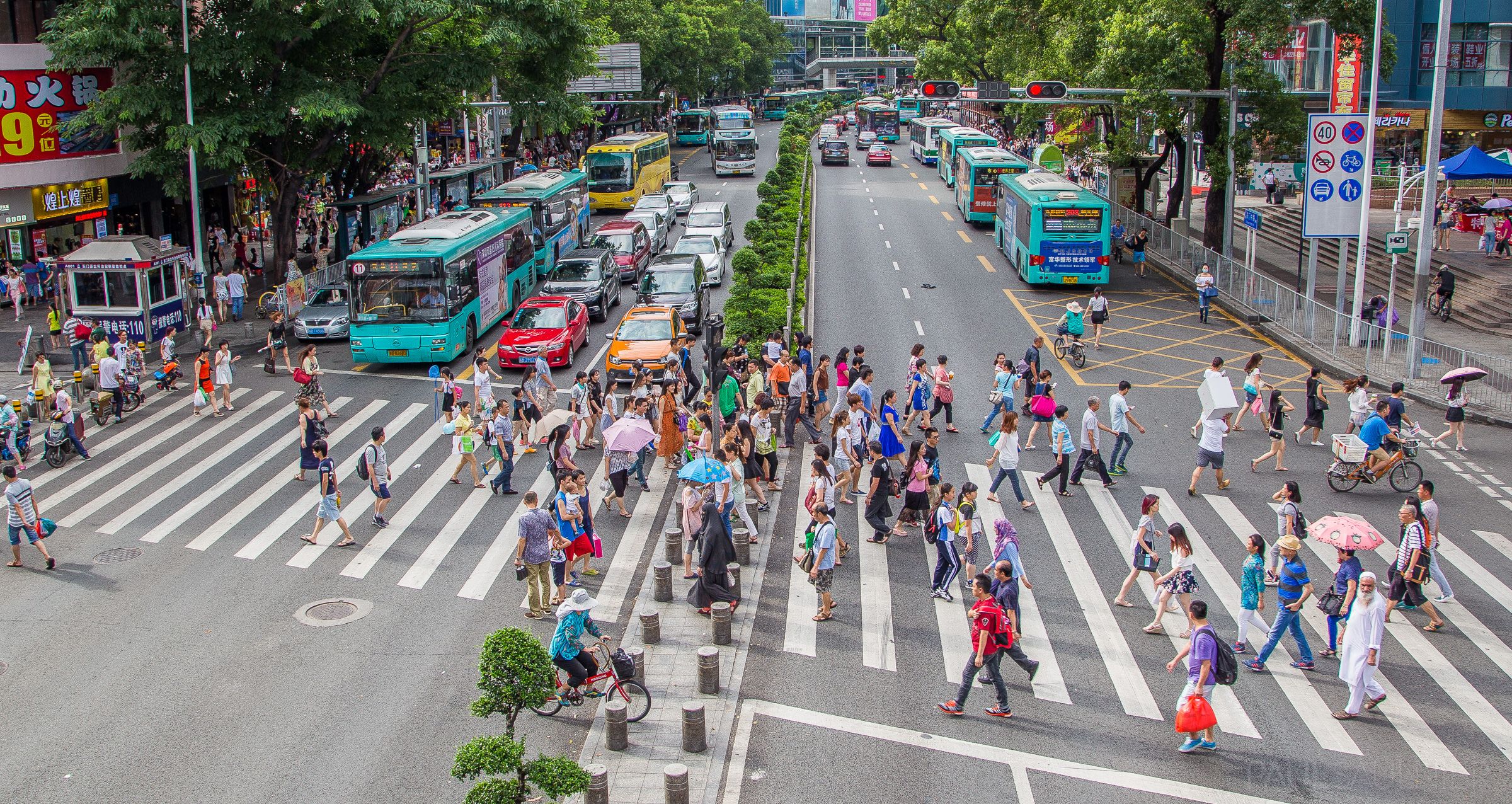 The same crosswalk during the day has a different feel, and it is still interesting to just stand and watch. 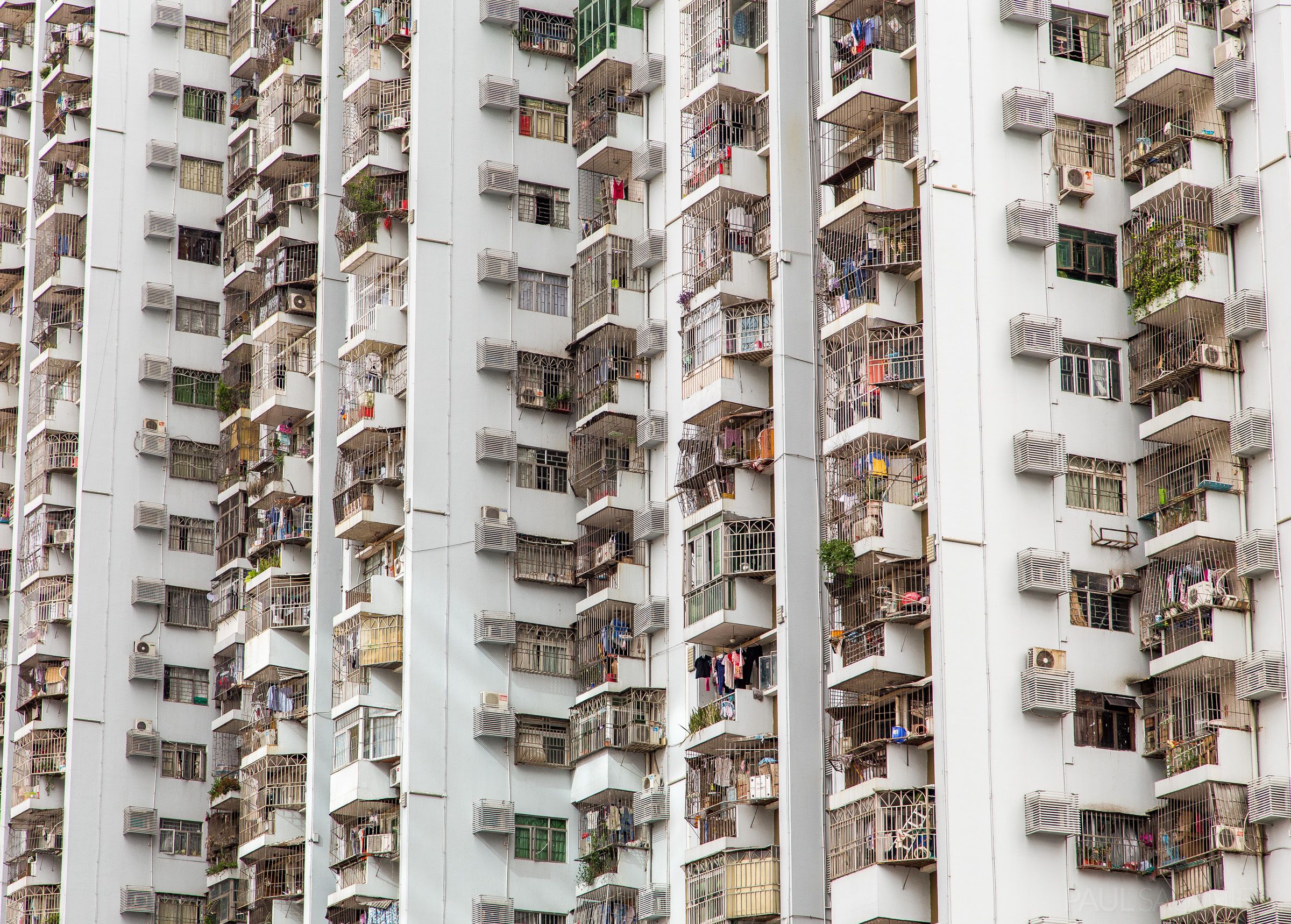 Large residences can found nearly everywhere in Shenzhen. Laundry and air conditioners break the monotony of these gray buildings.